An award-winning comedy filmed in Georgia's capital Tbilisi has been nominated by cinema enthusiasts all over the globe for a top award at a film festival in the United Kingdom.

The 2014 black comedy Lost in Karastan was chosen among nearly 100 films vying for prizes at the annual National Film Awards (NFA) in London, UK.

The film contest awards film projects and industry figures based on public nomination and vote. This year Lost in Karastan was among more than 90 fiction and documentary works that will be presented at the film festival on March 31.

The film festival will award prizes to films, actors and filmmakers in a total of 18 categories. Lost in Karastan was nominated for Best Comedy.

Nominations for the awards were decided by film lovers who submitted their votes from May 2015 to January 2016 through the NFA website.

The actual winners are also decided by the cinema audience. Voting started on March 15 and will end on March 25.

NFA organisers said 1.3 million people had already cast their vote through the website. 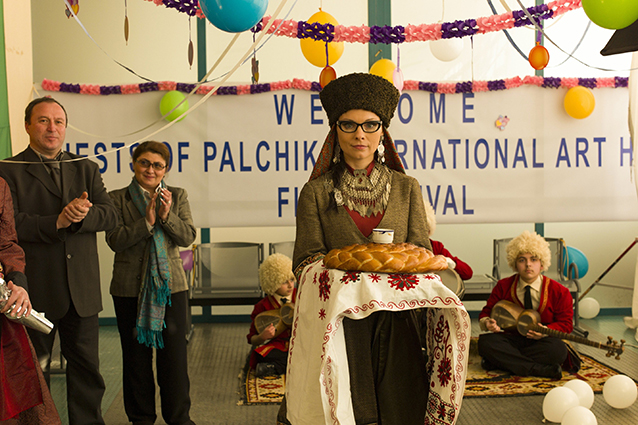 A still from the 2014 film Lost in Karastan. Photo by Piffl Media.

Lost in Karastanwas co-produced by Georgia, the UK and Germany. It was directed by British filmmaker Ben Hopkins, with the screenplay by award-winning Polish director Pawel Pawlikowski.

The production cast British actor Matthew Macfayden, known for his performances in Pride and Prejudice (2005) and Death at a Funeral (2007), in the principal role.

The film’s plot tells the story of an unsuccessful American film director invited to film a national cinema project in a fictional Caucasian republic of Karastan.

Broad comedy this may be, but it’s well made and founded on a funky kind of social-realist plausibility, and the locations (in Tbilisi, Georgia) are rather amazing," said The Guardian newspaper's review of the production.

The comedy won the Producers Award at the 2014 Hamburg Film Festival in Germany. Last year Lost in Karastan screened at the 2015 Sofia International Film Festival's section Focus on Georgia.

All nominations and winners of the contest were determined by votes submitted by film fans.

The full lit of categories and nominations for this year's awards can be viewed on the official website here.

See the trailer for the satirical comedy Lost in Karastan below: