A new art installation at a historic palace ruins in western Georgia is allowing visitors to take a step back in time and experience the complex as it was 800 years ago.

A special glass pane installed in the garden surrounding the medieval Geguti Palace shows visitors the complete original shape of the monument thanks to an transparent illustration inscribed on the glass.

The inking shows the palace walls and a rooftop dome that has not survived the times. The glass panel installation was erected by the National Agency for Cultural Heritage Preservation of Georgia.

The Palace, built in the 12th Century, is a significant place as it’s the only remaining monument in Georgia that boasts architecture from the time when Georgia was a united kingdom. 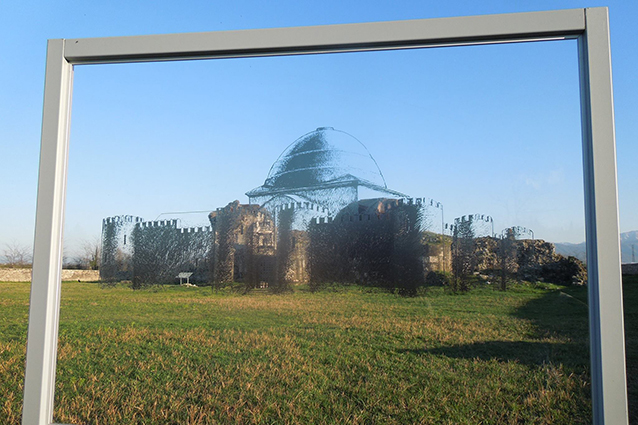 The panel outlines the shape of the palace’s original walls and the central dome on top of the existing structure. Photo from the National Agency for Cultural Heritage Preservation of Georgia.

The state agency said it planned to bring similar installations to other areas of monuments of cultural heritage throughout Georgia.

Geguti Palace, located just outside the western Georgian city of Kutaisi, has been slowly crumbling since its creation about 800 years ago. In May 2015 recent restoration efforts were launched to bring the monument back to its former glory.

The ruins of the palace complex occupy an area of more than 2,000m2 along the Rioni River. The palace was frequently featured in Georgian historical records as a beloved place of rest for Georgian royalty.

Geguti Palace was built in the 12th century and was used as the summer residence of Georgia’s Queen Tamar, who ruled the country from 1184 to 1213.

During her reign Geguti Palace was where her first husband Prince Yuri Bogolyubsky led a coup against the Queen in 1191.

The Palace ruins are the only remaining monument in Georgia that boasts architecture from the time when Georgia was a united kingdom. The main complex of the Geguti Palace was constructed during the period considered as Georgia's medieval ‘golden age’.

The earliest structure of the Palace was believed to be a plain, one-room building with a large fireplace that dated back to the 8th to 9th Century.