Now the Government [according to the current Constitution] is responsible for any crisis in Georgia and the crisis situations should be managed by the executive branch of power and its leader, the Prime Minister,” read the statement.

The Government needs effective tool to manage crisis situations operatively. In this case this tool is the State Security and Crisis Management Council.”

Kvirikashvili stressed that by raising this issue, some political players had tried to use the "constructive steps” of the Government aimed at political stability for their own political reasons. 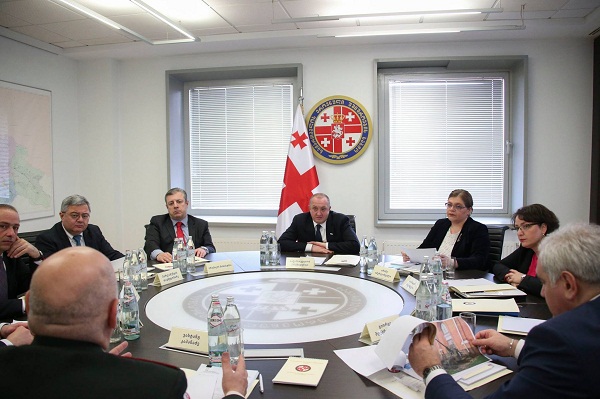 The National Security Council meeting.  Photo by the President's webpage.

The SSCMC was established in November 2013. It is tasked to work on issues of domestic and foreign state security policy and strategic issues of ensuring stability and rule of law.  Making political decisions to manage all types of crisis situations containing a high risk of danger to state interests was also the responsibility of the Council.

Meanwhile the NSC is tasked to discuss issues related to the national military strategy of Georgia. It also discussed issues directly related to the military development and organisation of the country’s defence interests, cases of armed attacks against Georgia, declaration of a ‘state of emergency’ and more.