From November 1, modernised 100 GEL (Georgian Lari) banknotes in bright new colours and sizes will come into circulation around the country, announced the National Bank of Georgia (NBG).

Meanwhile updated 20 and 50 GEL notes were released in February and all new banknotes currently circulate alongside the old notes.

Extra high-tech security features were added to the new banknotes, making them better protected from fraudulent copying. The bills were also of better quality and met top international standards.

NBG said the new money depicted the same iconic faces but had a vastly different and more vibrant look with additional elements.

The upgraded Lari banknotes are protected with modern and high technological and security features that … are easily intelligible to users. Furthermore, the banknotes have special improved features for visually impaired people,” said NBG.

During the 20-year history of the Georgian Lari, updating the 20, 50 and 100 GEL banknotes was the first major upgrade of the banknote’s design. 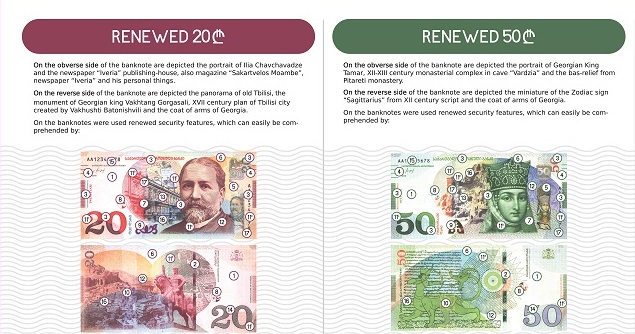 The style of design, parameters and security features of the renewed banknotes were modern, tested and consecutive for each denomination. Furthermore, the components of the design were integrated into modern security features, which consequentially created "a concept of the one family”, said NBG.

Later the Bank will also modernise the five and 10 GEL banknotes.

On March 15 at the High Security Printing Europe conference, the national banks of Georgia and Kazakhstan were awarded the coveted Regional Banknote of the Year 2016 award, sharing the honours for Georgia’s new Lari currency series and Kazakhstan’s 20,000 Tenge banknote.

The award recognised outstanding achievement in design, technical sophistication and security of a banknote or banknote series.