One of the earliest theatre banners produced in the 19th Century and printed in Georgia will soon enrich the surviving historical archive of early opera and ballet posters preserved in the country, after it was purchased at a European auction last week.

The 1854 poster, printed in Russian language on silk, was made for that year's Tbilisi performance of the opera La muette de Portici by French composer Daniel Auber.

The mid-19th Century poster reads the cast and production information on the show, which being the earliest French grand opera, holds historic significance.

The first show for this opera was presented at the Paris Opera House in 1828. 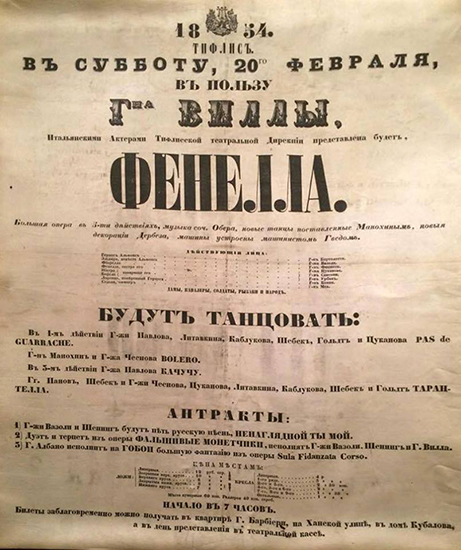 The 1854 poster for the performance of the French grand opera 'Fenella' will be brought to Georgia to be preserved in historical archives. Photo from Giorgi Kalandia/Facebook.

The Tbilisi production was titled Fenella, after the name of its principal heroine and was performed for the public in Georgia's capital on February 20, 1854.

The five-act opera cast eight Italian opera singers of the Tbilisi Theatre Management as well as Russian ballet dancers, as the Georgian opera and ballet schools were still in their infancy.

The poster also announced short musical performances by singers and musicians during breaks between the five acts of the show.

The purchase of the banner was announced by Tbilisi-based Art Palace museum director Giorgi Kalandia to his social network followers on Saturday.

Kalandia said the banner would be brought to Georgia to be preserved in historical archives. He called the news a "historic" event and a "special occasion" for the Art Palace, which will house the old banner.

Early theatre banners printed in Georgia are rare to find as the majority were destroyed in three destructive fires at opera houses and theatre archives in Tbilisi and Kutaisi - two central cities of theatre life in the country - in 1874, 1894 and 1914.

The fires completely destroyed various production material and historical items including banners for opera and ballet shows staged in Georgia over 50 years from the late 19th to early 20th Century.

Before the new purchase, the earliest theatre banner printed in Georgia and still preserved in the country was an 1879 poster kept in the Art Palace archives.

The very first Georgian theatre banner is preserved in historical vaults in Moscow, Russia, with a copy available for viewing in Tbilisi.