Georgia has enjoyed two decades of fruitful cooperation with one of the world’s largest oil and gas companies British Petroleum (BP).

The work BP has undertaken in Georgia as well as its current and future plans were mentioned and applauded by Kvirikashvili, while Dudley stressed Georgia was an important partner of BP.

The importance of the South Caucasus Pipeline Expansion (SCPX) project was mentioned, and when complete, the pipeline will extend Georgia’s role in transporting oil and gas to Europe.

BP and its partners were now working on the SCPX project, which represented the single largest foreign investment in Georgia at $2 billion USD over the next four years.

The Southern Gas Corridor (SGC) consists of a chain of pipelines which will transport gas from the Shah Deniz gas field in Azerbaijan to Europe via Georgia and Turkey. The pipeline starts from the Sangachal terminal near Baku. It follows the route of the Baku-Tbilisi-Ceyhan (BTC) crude oil pipeline through Azerbaijan and Georgia to Turkey, where it is linked to the Turkish gas distribution system.

The SCP expansion works has now entered the final phase to increase the gas capacity of the pipeline to 16 billion cubic metres (m3) per year from Shah Deniz 2 mine to Europe.

With this extra gas running through Georgia, the country will receive an increased supply of natural gas "at preferential prices” from the end of 2018 or beginning of 2019, announced the Government of Georgia.

In London this morning, Dudley said BP’s partnership with Georgia was invaluable

[Kvirikashvili and I] had a very fruitful meeting where we discussed the 20 years of successful partnership between BP and Georgia. We are investing billions of dollars in the pipeline and we discussed our history and future cooperation. We can share our experience with anyone who intends to invest in Georgia and we are very enthusiastic in this regard,” said Dudley after meeting Kvirikashvili.

Meanwhile, other BP officials said the SGC project was running on time and on budget. 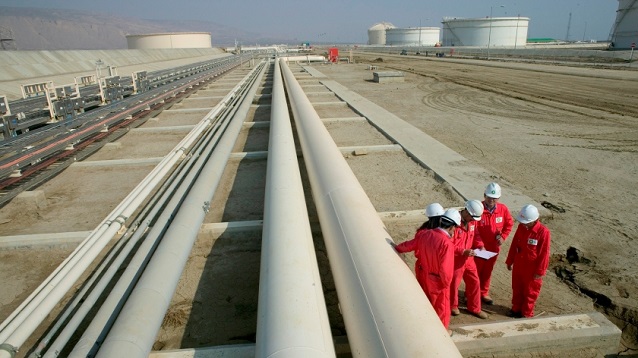 The South Caucasus Pipeline was built to export Shah Deniz gas from Azerbaijan to Georgia and Turkey. Photo by British Petroleum.

The pipeline has been operational since late 2006 transporting gas to Azerbaijan and Georgia, and from July 2007 to Turkey from the Shah Deniz Stage 1.

Last year operating expenditures were about $47.5 million USD while the SCP cost about $1.1 billion USD in capital expenditure, said BP.

The expansion of the SCP was part of the Shah Deniz Full Field Development project. This expansion involved laying new pipeline across Azerbaijan and the construction of two new compressor stations in Georgia to significantly increase the gas volumes exported through the pipeline.

At the border between Georgia and Turkey, the pipeline will link into other new pipelines to transport gas into Turkey and the European Union (EU).