Today Georgia marks two important milestone events – on this day in history the country signed its first independence referendum and the day was also the birthday of Georgia’s first president, the late Zviad Gamsakhurdia.

Almost 24 years has passed since Georgian people declared their will to be independent nation after destroy of Soviet Union. On March 31, 1991 the vast majority of Georgian people across the country, including now occupied Abkhazia and Tskhinvali (South Ossetia) regions, legally confirmed they had chosen the path of state independence. Following this referendum, on April 9 Georgia officially declared its independence. 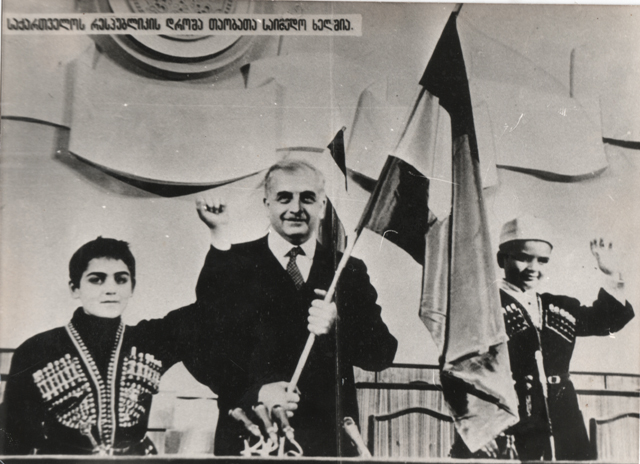 Zviad Gamsakhurdia, with his son Giorgi Gamsakhurdia attended opening of the first session of the Supreme Council, 1990. Photo from the National Parliamentary Library of Georgia, owner:Central Library of Zugdidi,

Georgia’s current Prime Minister Irakli Garibashvili released a statement today where he emphasized the importance of today’s date in Georgia’s recent history. He said March 31 was a "landmark” day for the country and its people.

The referendum was a bold step taken by our country and population towards national independence. The March 31 referendum still retains its significance - it is the firm will of the Georgian people and the foundation of the state independence of Georgia,” he said.

Georgia was the fourth Soviet republic, after Baltic States Lithuania, Latvia and Estonia, to organise a referendum regarding independence.

On another note, today Georgia is celebrating the birthday of the first democratically elected president of independent Georgia Zviad Gamsakhurdia. If still alive, Gamsakhurdia would have celebrated his 76thbirthday today.

This day is associated with the first Georgian president Zviad Gamsakhurdia, under whose leadership, the Georgian nation firmly embarked on the path of independence,” said Garibashvili.

March 31 is also notable as Zviad Gamsakhurdia was born on this date. Today we live in a free and democratic state, fighting fairly for the return to the European family. I believe this fight will be successfully completed," he said.

When the Soviet Union collapsed in 1991, the people of Georgia had the opportunity to elect its first president. Gamsakhurdia was elected in March 1991 after gaining 87 percent of votes but his reign was brief.

He was found dead in still unclear circumstances with a single bullet wound to the head in 1993 at the age of 31. He is the only Georgian president to have died whilst formally in office.