Georgia’s President Giorgi Margvelashvili has posthumously recognised Irina Enukidze, the now deceased mother of a young man who was murdered in 2006 in an incident linked to former government officials.

Enukidze’s son Sandro Girgvliani was tortured and killed nine years ago. Since then Enukidze has fought for her son’s name and against violence.

The President awarded the brave mother with the King Tamar Order for her "outstanding contribution to the country and nation and outstanding state and public activities”.

"Mrs. Irina has become a symbol of the fight for humanity, human rights, right to life and fight against violence,” said President Margvelashvili while presenting the award to Enukidze’s husband and Sandro’s father Guram Girgvliani.

S. Girgvliani was head of the United Georgian Bank's Foreign Department when he was tortured and killed on January 28, 2006. He had been severely assaulted and his body was found with multiple injuries near Tbilisi.

According to different sources, the 28-year-old’s death was connected with a situation that developed at Sharden Bar, an elite Tbilisi bar earlier that evening.

It was alleged former Inspector General of the Ministry of Internal Affairs Vasil Sanodze was holding his birthday party with colleagues at the bar, accompanied by then-Interior Minister Vano Merabishvili’s wife Tako Salakaia. She was a friend of S. Girgvliani's girlfriend Tamar Maisuradze, who was also present at the party. Sources alleged Maisuradze was the reason why S. Girgvliani had an argument with Ministry representatives that evening. Later that same night S. Girgvliani was found dead. 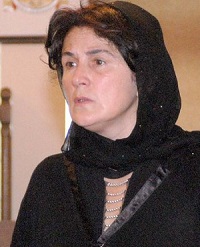 Since her son’s death Enukidze fought for justice to be served and for all offenders to be adequately punished.

In late 2006 several then-Interior Ministry employees were held accountable for their involvement in the murder but Enukidze said she would not stop fighting until all involved, including higher officials linked to the case, were punished.

During her plight Enukidze became ill; she was diagnosed with cancer and died in early 2007.

Her family and friends continued her fight, which reached a peak in April 2011 when the European Court of Human Rights in Strasbourg partially satisfied a lawsuit filed by the Girgvliani family against the Georgian government.

The Court ruling said the investigation into Girgvliani’s death "clearly lacked the requisite, independence, impartiality, objectivity and thoroughness”. The Court ordered the Georgian government to pay €50,000 (141,000 GEL) compensation to the Girgvliani family for moral damage.

Before her death Enukidze urged then-president Mikheil Saakashvili several times to show an interest in her son’s murder. At the time she said: "I want to address the President of Georgia. Every other day he cuts the ribbon of new fountains, maybe he can once cut the ribbon of this tragedy too.”

Despite this, Saakashvili never expressed his opinion about the high profile murder case that was regarded as the most controversial criminal case in Georgia’s modern history.

In October 2014, Tbilisi City Court delivered a guilty verdict against Georgia’s former Interior Minsiter Merabishvili and other ex-officials in the prolonged S. Girgvliani murder case. The ex-Minister was charged with abuse of authority and fraud, in which he faked testimonies related to the case.

Today President Margvelashvili praised Enukidze’s bravery and said: "They killed her child but she continued fight to save others’ children, to save our children. She sacrificed her own life to this fight and she fought until the very end.”

Earlier this year President Margvelashvili announced 2015 as the Year of Women. Enukidze was awarded as a brave and active woman who had contributed within this initiative.