An iconic stage curtain destroyed by fire in the 1970s has been restored in Germany and restrung at the Tbilisi Opera and Ballet State Theatre.

An informal ceremony was held on Saturday at the theatre, which is currently being restored, to celebrate the return of the iconic stage curtain, which depicted a sketch by late Georgian painter Sergo Kobuladze.

In front of officials including Minister of Culture and Monument Protection of Georgia Mikheil Giorgadze, theatre figures and students of the late painter, the new curtain was raised at the still-closed theatre.

The Ministry said the restored piece would hang behind the main curtain and all visitors to the theatre after its reopening next year would be able to see Kobuladze's painting. 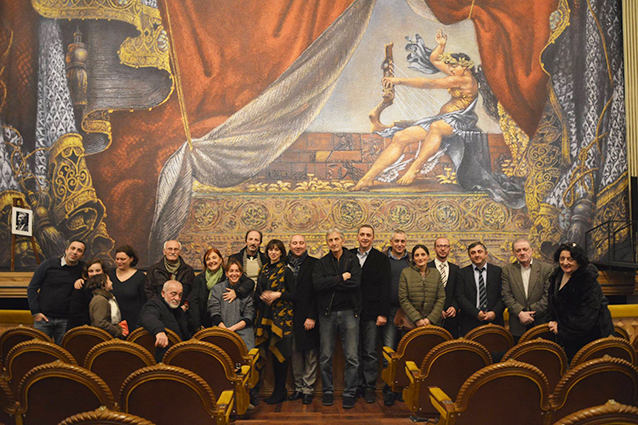 The new curtain was raised in an informal ceremony on Saturday. Photo from Ministry of Culture and Monument Protection of Georgia.

The curtain arrived in Tbilisi on Friday after it was created by experts from Gerriets, a German stage machinery and textile company, from Kobuladze's sketch.

The German specialists created the curtain from a digital version of the original sketch after the possibility of making a new original curtain was ruled out in Georgia due to difficulties of its technical and artistic recreation.

The painting was transformed into digital format by professor Nana Iashvili of the Tbilisi Academy of Arts before Gerriets experts worked to transfer the painting onto curtain material.

The curtain painting, Kobuladze's second piece for the Tbilisi Opera and Ballet Theatre, became a trademark of the venue before a fire in 1973 destroyed much of the building's interior including the unique artistic work.

The original sketch by the painter is preserved at the Georgian Museum of Theatre, Music, Cinema and Choreography. The Museum, also known as Art Palace, obtained the piece from the painter’s cousin's family in July this year.

The Tbilisi Opera and Ballet State Theatre has been under restoration since 2010. The upgrades to the facility included complete renovation of its studios and halls, as well as installation of modern equipment for the main stage.

The theatre is due to open early next year.