A panoramic tile panel illustrating a significant moment in the history of Orthodox Christianity has been unveiled at a historic winemaking Chateau in eastern Georgia.

The panel - depicting the 17th Century torture of Queen Ketevan of Georgia – was unveiled at Chateau Mukhrani on October 18 as an exact replica of the original, which is preserved at the Convento da Graça Church in Portugal’s capital Lisbon.

Created by Portuguese experts in the late 17th Century using faience and porcelain tiles, the panoramic display measured about 10 metres long and two metres high. The panel depicted the Georgian Queen’s torture in the historical Iranian city of Shiraz, Persia in 1624 at the hands of Shah Abbas I of Persia.

In 1614 Queen Ketevan went to Persia to negotiate with the Shah then surrendered herself in a bid to prevent an imminent Persian invasion of the East Georgian Kingdom of Kakheti. 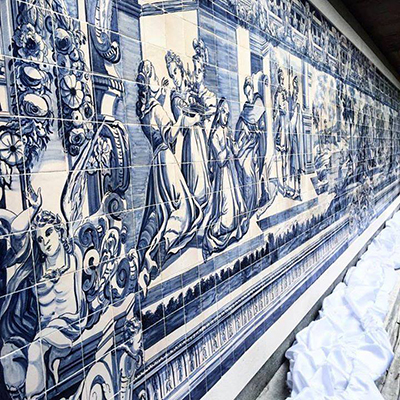 The panoramic display is made of painted faience and porcelain tiles. Photo by Embassy of Georgia in Portugal.

Queen Ketevan was tortured and killed after she refused to renounce her Christian faith and convert to Islam while in captivity.

Her torture was witnessed and documented by Catholic missionaries from Portugal before being recreated on the panel, commissioned by the Catholic Church in the 17th Century.

The panel was later discovered in Lisbon by Georgian scientists and religious figures, while its replica was created and brought to Georgia within an initiative by Georgia’s Ambassador to Portugal Giorgi Gorgiladze and the founders of Chateau Mukhrani.

Sunday’s unveiling of the tile panel art was held within the annual Rtveli wine harvest at the Chateau. The facility was established to maintain the historical tradition of a 19thCentury winemaking centre and originally belonged to the Mukhranbatoni noble family.