Georgia among first recipients of investments from Asian investment bank

Georgia will be one of the first countries in which the newly established Asian Infrastructure Investment Bank (AIIB) will invest.

The Bank’s investment in Georgia will provide numerous benefits for the local economy, mainly in the fields of transport and energy. 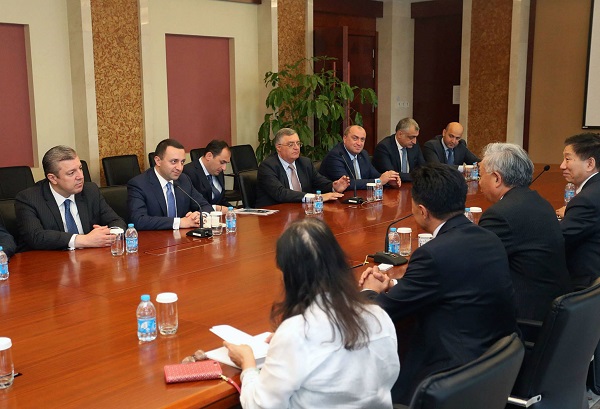 Garibashvili and a Georgian delegation are in China on a working visit attending the September 9-13 World Economic Forum.

The AIIB, still in its establishment phase, is expected to begin operating by the end of this year. Its purpose is to provide loans for infrastructure projects in developing countries in Asia.

At today’s meeting with AIIB representatives, Garibashvili emphasized the "profitable business environment” in Georgia, as well as on the country’s important strategic location. He added the country would soon reap the benefits of the Deep and Comprehensive Free Trade Area (DCFTA), which was part of the Association Agreement (AA) Georgia signed last June with the European Union (EU).

There are many fields in Georgia that Chinese investors might be interested in,” Garibashvili said, adding Georgia’s transport, energy, tourism, healthcare and agriculture sectors could be particularly attractive for foreign businessmen.

With the Chinese side PM Garibashvili touched on the increasing trend of close cooperation between Georgia and China and spoke about the role and importance of the New Silk Road project that envisaged finding the fastest and easiest ways to connect Europe and Asia.

He reiterated that centuries ago Georgia was part of the Silk Road route and now the country was "absolutely ready” again to become a logistics centre that connected Europe and Asia.

Meanwhile Georgia is a cofounding nation of the AIIB. Georgia was the 45th country to join the Bank and the first nation to confirm its membership by ratifying the relevant documents.

Looking ahead the Bank is understood to support Georgia to find financial resources for infrastructural and other projects.

Yesterday Garibashvili said as a final result, Georgia was waiting for $500 billion USD financial support from the Bank.

Also today, within the framework of the World Economic Forum, Garibashvili gave a speech at Beijing’s International University of Business and Economy, where he was awarded the title of "Honourary Professor” of the University.

Thanks to Beijing University of International Business&Economics for the title of Honorary Professor #GeorgiaChinapic.twitter.com/xVATOlJ7Nm