People around the country are celebrating the annual festival of Didgoroba – the day of Didgori - which marks the historic battle fought almost 900 years ago resulting in the formation of modern day Tbilisi.

Head of the Georgian Government Irakli Garibashvili visited Didgori today, spoke of the legend and of his vision to develop the small town that lies about 40km west from capital Tbilisi.

Didgoroba is a glorious day for us. It’s the symbol of our country’s strength, freedom, and unity of our people. Both Government members and citizens should come here and proudly celebrate,” said Prime Minister Garibashvili. 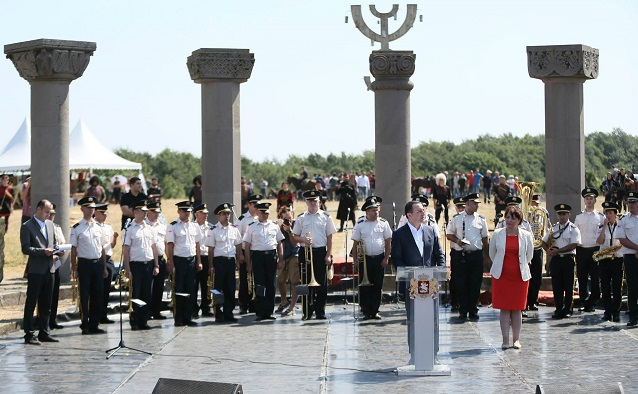 Didgori plays a significant role in Georgia’s history. According to legend, the Battle of Didgori was a David and Goliath battle fought on August 12, 1121, between the armies of the Kingdom of Georgia and the declining Great Seljuq Empire.

The fight took place on Didgori soil and resulted in a decisive victory for Georgia and its leader King David IV over the Seljuk Invasion Army and the subsequent reconquest of Muslim-held Tbilisi. This later became the country’s royal capital.

Victory at Didgori inaugurated the medieval Georgian Golden Age and was celebrated in the Georgian chronicles as "a miraculous victory”.

While remembering the tale PM Garibashvili stressed it was important for future generations to learn about this important piece of history and he instructed Education and Science Minister Tamar Sanikidze to add a note in the Georgian curriculum that obliged all schools to bring their students to the Didgori valley to learn about the history that took place there.

Developing the area was important and there were plans to build new infrastructure in the Didgori valley, said PM Garibashvili. This included a new central city square and more opportunities for local students and aimed to be completed by August 2016. The purpose of this was to create a prosperous future for all of Georgia and to build a strong 21st Century European state with strong politics and strategies.

The PM attended the Didgoroba festival with other members of Cabinet, and they all paid tribute to the heroes who sacrificed their lives for the country.

Last year Garibashvili presented the first annual award to a distinguished military serviceman for his service to Georgia. At the time Garibashvili said the award would be presented every year on August 12 by the Ministry of Defence at the Didgori Battle commemoration.