“The Motherland Is Calling Us!”: What’s behind famous WWII poster?

"The Motherland Is Calling Us!” - this poster by Georgian artist Irakli Toidze is considered to be the most significant graphical work of the Second World War.

The poster was believed by some to be a masterpiece, while others thought it was just another piece of Soviet propaganda.

Whatever the case, the poster has a very interesting history that is worth telling today as the world celebrates the end of WWII.

The woman on the poster is the author’s wife. It was created in July 1941 during the war between Nazi Germany and the Soviet Union.

Upon hearing the first report by the Soviet Information Bureau that Nazi Germany had attacked the Soviet Union, Toidze’s wife ran into his studio crying out "war!”. Startled by the expression on her face, the artist ordered his wife to freeze and immediately began to sketch the piece.

When Soviet leader Joseph Stalin saw the poster, he immediately loved it and ordered it to be mass produced with 5,000 copies being printed and sent to every commandant’s office and recruiting station in the Soviet Union.

The caption on the parcels read: "Top secret. Must only be opened with special ordinance”.

The parcels were opened in late June 1941, a week after the Germans invaded the Soviet Union. Following this the poster was plastered on every house, all cross-roads and walls in the Soviet Union. The poster became the collective image of a mother calling on the help of her sons to protect their homeland.

The original poster is now kept in Georgia’s National Library in Tbilisi. 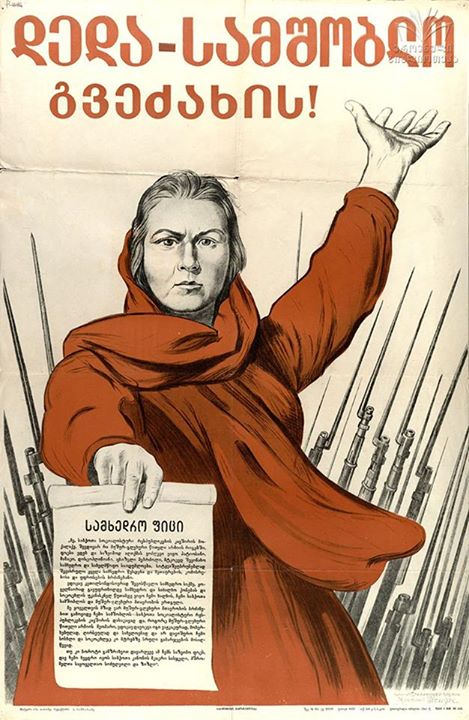