Georgia is heading in the right direction, say respondents

Results of the International Republican Institute (IRI) poll reveal almost half of people surveyed (48%) believe Georgia is heading in the right direction. The survey results were released today, April 1.

Titled "Georgia National Study”, the document results reflect data collected from February 19 to March 13, 2014, in face-to-face interviews with 3992 Georgian residents aged 18 years old. (The survey has an average margin of error of +/-1.5%. The response rate was 70%).

Mood of the country

The poll revealed 52% of the population said the economic situation in Georgia had stayed the same over the last two months, while 16% believed it had improved and 29% believed it had worsened. 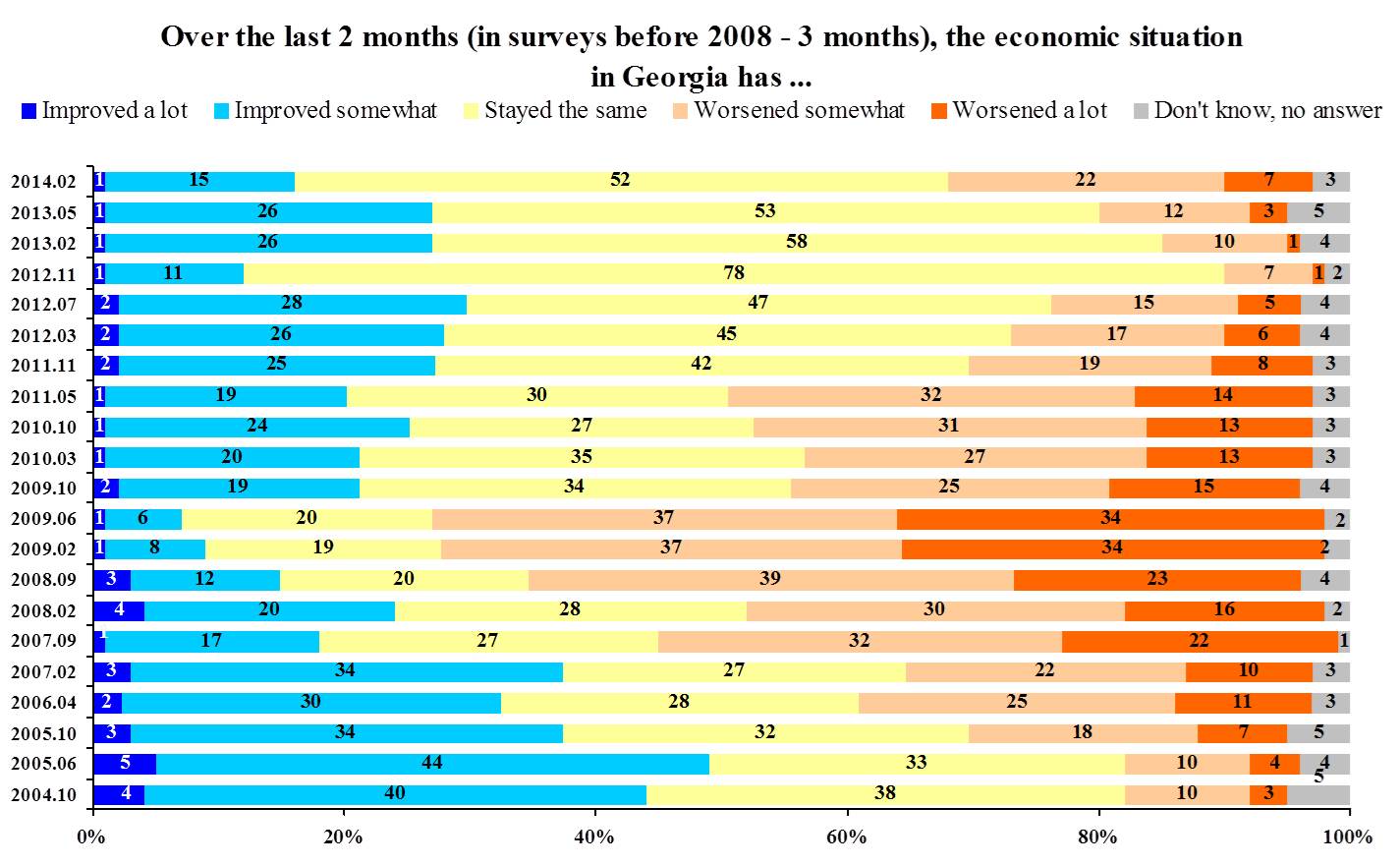 The IRI poll showed employment continued to be the top national issue of concern in Georgia (70%), followed by lost territories (41%) and economic situation (38%).

Many residents continued to be threatened by war, and 72% of respondents said this was their biggest fear in the reporting period.

Expected disorders and a hard economic situation were also highlighted as fears from those surveyed.

The IRI poll asked respondents about the three main issues the new Parliament needed to immediately address. Those who answered the questions believed unemployment, economic and legislation problems were issues that need to be addressed.

The importance of politics gained a mixture of results. For some, politics was not hugely important, while others ranked it with great importance – 39% showed a low interest in politics, 33% showed a medium-level interest and 28% revealed a high interest.

The main expectations from the current Government were employment, improving the economic situation and well-being of the country.

The situation in Georgia has changed slightly in comparison to the May 2013 poll, where the top three expectations from the Government were employment, improvement of economic situation and fulfilling promises.

Distributing vouchers of agriculture, public insurance and free books were named by those surveyed as the Government’s main accomplishments in 2013.

Georgian’s placed high importance and respect in the Church. The level of confidence in the Church was extremely high and the majority of respondents (94%) said the Church was the most trusted institution in Georgia, followed by the Army. 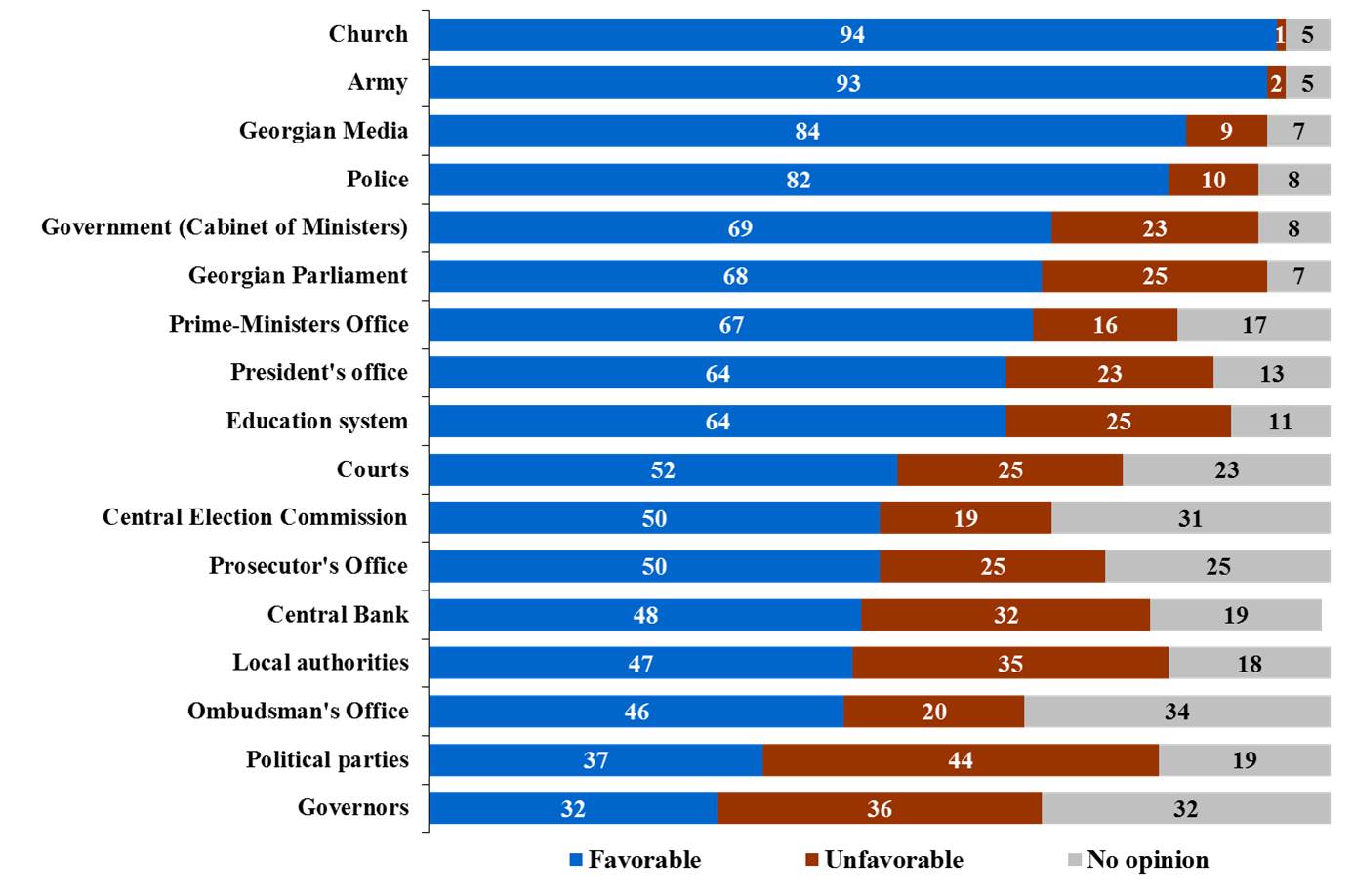 The United States of America was named as the most important partner for Georgia by 39% of respondents while 74% of people named Russia as the country that comprised the most political and economic threats.

The number of people who would ‘fully support further dialogue with Russia’ decreased from 82% to 76%, when compared to the May 2013 poll.

Moving ahead, 60% of people believed Georgia will become a member of NATO. Nearly the same amount of respondents (61%) said NATO should grant a Membership Action Plan (MAP) to Georgia at the next NATO Summit.

The IRI poll also revealed the majority of respondents (70%) fully supported Georgia joining the EU and 52% thought Georgia would sign the Association Agreement with the EU this summer.

Those people believed signing the Association Agreement with the EU would improve Georgia’s economic situation and ease visa regulations with EU countries.

Television remains to be the number one source where Georgian’s go to find their news and current affairs.

When asked about the three main issues the Mayor of Tbilisi needed to take care of, almost two thirds (61%) said the welfare of the city was the major priority.

How important is it for your that the Tbilisi mayor should originally be from Tbilisi? February 2014 (%) 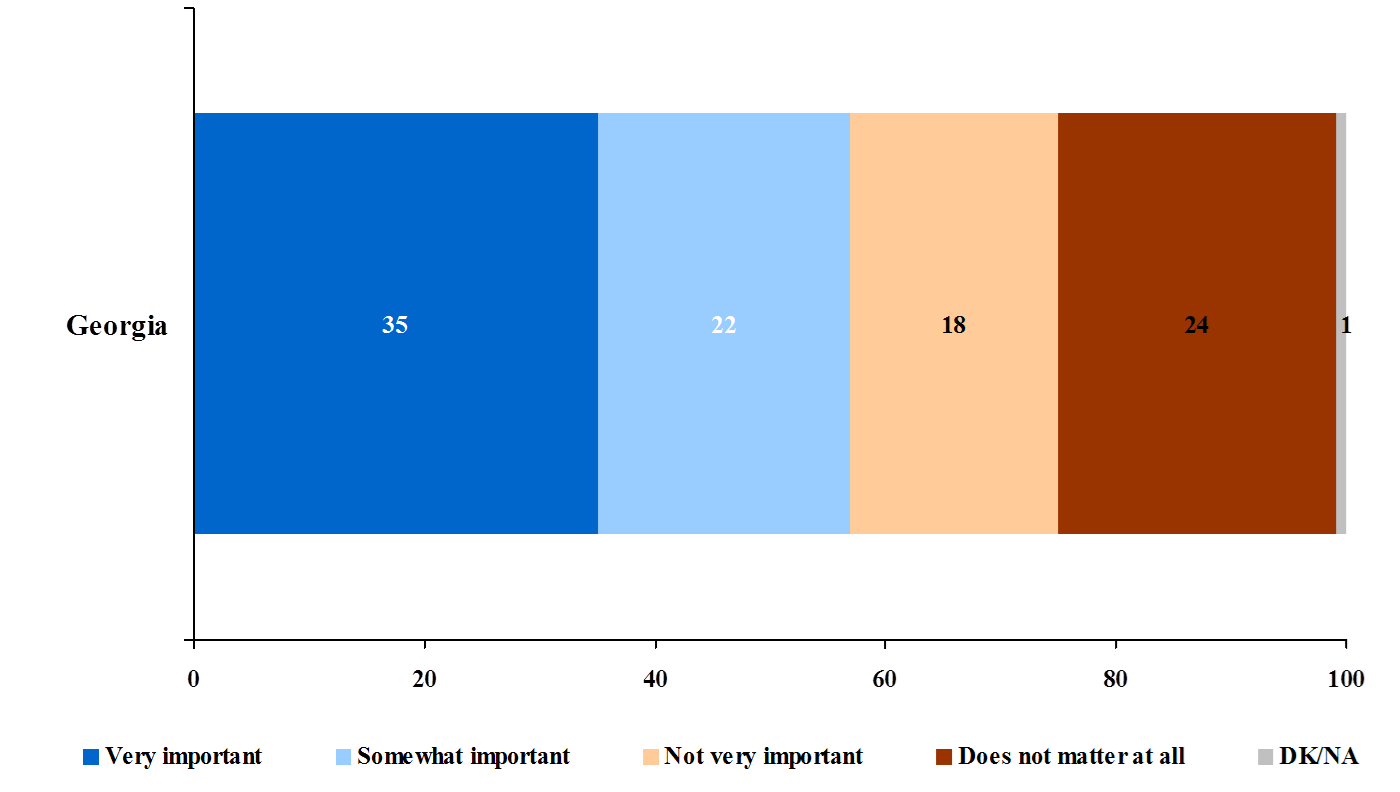 It also asked, if Mayoral elections were to be held next Sunday, from candidate and political party would you vote for, 11% said that they vote for the candidate form a non-Parliamentary opposition.

In addition, a third of respondents (35%) believed it was very important the Tbilisi Mayor originally came from Tbilisi.