Georgia is calling on the world to act in response to the emerging political crisis in Abkhazia.

Georgia’s Ministry of Foreign Affairs said it was concerned about the current state in Georgia's occupied region, after opposition demonstrators stormed the presidency in Sukhumi yesterday and demanded the de-facto President resign.

The Ministry also called on the international community to be actively involved in the resolution process.

First Deputy Minister David Zalkaliani stressed there was "urgent need” to resolve the current situation, which could escalate into a larger crisis, he said.

Zalkaliani contacted Ambassador Angelo Gnaedinger, who is the Special Representative of the Swiss OSCE Chairmanship for the South Caucasus at the Geneva Talks, and emphasized the urgency of the situation and need for immediate action by the international community, particularly the co-chairs of the Geneva talks to prevent the situation from developing further. 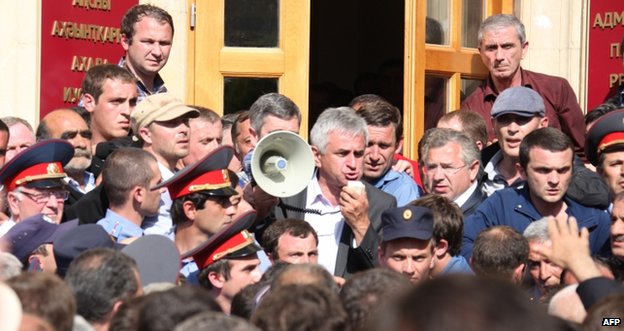 Opposition leader Raul Khadzhimba addressed protesters in front of the presidential office in Sukhumi on Tuesday.

Zalkaliani believed the international community would support Georgia and show an interest in the situation in the breakaway region.

Meanwhile, Gnaedinger pledged to inform the OSCE Chairmanship with the current situation in Abkhazia and the Georgian Government's position of encouraging international support.

In another issue, Zalkaliani confirmed ethnic Georgians living in Abkhazia faced discrimination in regards to the issuance of passports.

"There are some instances of ethnic discrimination against Georgians who do not have Abkhazian passports. The Foreign Ministry have being conducting discussions with our international partners to help resolve this issue,” Zalkaliani said.

The process of issuing Abkhazian passports to residents of eastern border districts, including the Gali district which is heavily populated by ethnic Georgians, is continuing to cause conflict between current authorities in Abkhazia and the opposition.

The issue was slammed by opposition groups as threat to Abkhaz sovereignty.

According to the opposition, 27, 000 people received Abkhazian passports illegally and further issuance of passports were suspended following opposition demands.

This afternoon Zalkaliani met the UN Secretary-General's Special Representative and co-chair of the Geneva discussions, Antti Turunen and discussed the potentially dangerous situation. Turunen said he shared the Georgian Government's concern regarding the alarming situation in Georgia's occupied territories.

This information was also communicated to the EU in its capacity as co-chair of the Geneva Discussions.

Georgia's breakaway region Abkhazia, with its capital city Sukhumi on the Black Sea coast, was recognised by Russia as an independent state after the Russia-Georgia war in August 2008.