A document prepared by international audit company Deloitte Limited, revealed the income and the extent of ex Minister of Defense David Kezerashvilis business. The scandalous letter, published today in Georgian newspaper Alia, showed the former high official was the sole beneficial owner of the FPC Group, registered in an offshore zone. The turnover of the company in the year it established, 2009, was almost 9 million USD and increased to more than 795 million USD in 2012.

The property declaration, which he filled out as the Minister of Defense in 2008, one year before starting this business, showed only an apartment in Tbilisi, 108 sq.m and 51000 GEL ($28600 USD) in his bank account.

"FPC Group offers exclusive trans-shipment services to the oil industry in the region and internationally (Railway Transportation, Terminal Handling and Throughput, coupled with extensive state of the art storage facilities) for light petroleum products and petrochemicals originating from Turkmenistan, Kazakhstan and Azerbaijan, and delivered to the Poti, Batumi and Kulevi Oil Terminals in Georgia, states the document from Deloitte Limited. 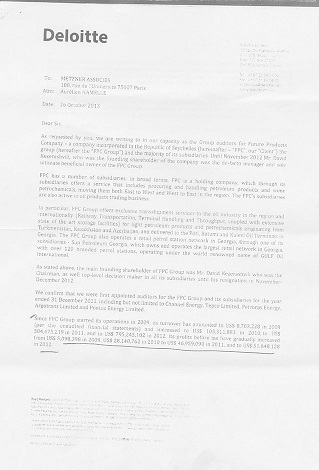 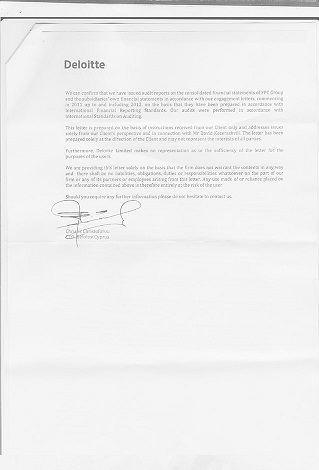 The newspaper Alia stated that it is ready to provide the Prosecutor's Office with the original document.

Georgias former Minister of Defense and Head of Financial Police Davit Kezerashvili was named on the Interpol wanted list before he was arrested on October 10, 2013, in France. However he has not been extradited to Georgia, yet. Kezerashvili is accused of bribe-taking, violating Georgian transport rules, in relation to large amount of movable items, and illegal money laundering.

According to the investigation, in the form of tax evasion, the state has lost 49 million USD, while Kezerashvili is believed to have received an income of 12 million USD. He also faces charges in the Tbilisi City Court of alienating TV Imedi in 2008 and Rike, exclusive territory on the Mtkvari river bank in Old Tbilisi.

On January 23, a French court is expected to discuss the extradition of Kezerashvili.

See details about Future Products Company in info-graphics below.