Nika Amashukeli, a 28-year-old Georgian referee, made history by becoming the first arbiter from a Tier 2 rugby country to judge a game between Tier 1 nations when he was picked for the match between Wales and Canada at Cardiff’s Principality Stadium last summer. Since then, the demand for the young professional has not ceased at international tournaments. On November 12, Amashukeli will judge the 2023 Rugby World Cup qualifier between Portugal and Kenya, while on November 19 he will take up an assistant referee role for the match between England and New Zealand.

Despite his busy schedule abroad, Amashukeli found time for an exclusive interview with agenda.ge to discuss the most interesting and challenging nuances of his career, prospects of Georgian rugby, and his future plans.

Q: On October 29, you judged an international fixture between Japan and New Zealand. As a referee, how would you evaluate the game?

A: It was a great match. Tokyo’s national stadium was filled with over 60,000 fans, which made the match even more special. As for the game itself, both teams played top quality rugby, leaving the crowd impressed. Japan was close to another historic victory [following their defeat of Ireland and Scotland at the 2019 World Cup], but fell short. Overall, the game had pace, tension and excitement, exactly what the audience loves. After the match the evaluation of the judging team was very good. I think we [the referee team] contributed a lot to the game.

Q: You have been invited to judge high-level tournaments over the last few years. What does this mean for you? Which was the most outstanding tournament from your perspective?

A: For me, as a referee from a Tier 2 rugby country, being involved in high-level matches is very special. It is also a motivation and inspiration for referees from other countries who are not in elite rugby nations.  For me it is the greatest passion, as I have been striving since childhood  to have the honour of representing Georgia in the international sports arena. Of course, this is [also] a great prestige for Georgian rugby and for the country as a whole.

Q:  In 2020, you were named Georgia’s best rugby referee of the year.  What  is the main criteria for awarding this title?

A: In this particular case, the main criteria is how the individual demonstrates a high level of knowledge of officiating. I am very happy for this title, as [it means] my hard work for the career has been appreciated.

Q:   How would you evaluate the Georgian referee school and culture?

The national referee school is outstanding with its discipline, structure and achievements. We have a very young referee corps with ambitious, mentally and physically strong people. At Rugby Europe competitions our arbiters are a step above [those from] all other countries and the demand [for them] is very high thanks to Davit Shubitidze, the head of the referee management service, Luka Kilasonia, the referee development manager and David McHugh from the management team, who created this environment.

Q:  You are known as an elite category rugby referee. However, before you started your arbiter career, you had a path in football. What sparked your interest in rugby and, in particular, in refereeing?

A: Since early childhood, sport has been my number one field of interest, although I have never stopped intellectual growth [either]. Without education and knowledge, success in sports, especially in team sports, will not be easily achieved. I tried several sports including swimming, judo and football, but none of them gave me the passion rugby did. In 2007, I watched Rugby World Cup matches featuring Georgia, and it finally gave me the push to connect my life with rugby.

Q: Once in an interview with Georgian media you mentioned that rugby has never been as tough as it is now. It also follows that rugby matches are full of challenges and difficulties not only for the athletes, but also for referees who have to make important decisions in a short space of time. What are the difficulties associated with your profession and what is the most important habit that helps you overcome them?

A: Rugby players' physical training, speed and strength have improved a lot. Therefore, more emphasis is now placed on safety and head contact [management]. Such moments are regulated by a number of processes and approaches, and on the pitch,  it is the referees who ensure all this, so the main pressure and criticism [in making right calls] falls on us. In addition, modern rugby has become much more focused on the framework of the rulebook, which has led to more involvement of referees in the course of the game. Obviously [some] spectators do not like this, which [sometimes] leads to aggression [towards arbiters], but they have to remember that the referee is doing something on the field that is a specific focus [as directed] by World Rugby [governing body]. All this cannot be done without mental and physical preparation. In addition, an elite referee must understand very well the specifics, dynamics, intensity and structure of the individual game. I would single out mental strength as my main advantage.

Q: Your profession and efforts are sometimes accompanied by critical responses along with positive evaluations. Following the summer season match between New Zealand and Argentina, All Blacks coach Ian Foster said you had made decisions beneficial to the Argentine team and were less fair to New Zealand. In general, how does such criticism affect you? Is it motivating or vice versa?

A: Criticism, insults and intolerance from the public are an integral part of a referee's life. Rugby in general is so complex and multifaceted that there is no losing team that will be satisfied with the refereeing, there are still moments to focus on. Also, there is no match that the referee will conduct without mistakes. The coaching staff of New Zealand said they “could not find the appropriate language” for my refereeing style. It was their point of view and opinion, but there is World Rugby referee management which objectively evaluates every match and makes referee appointments for future matches accordingly. 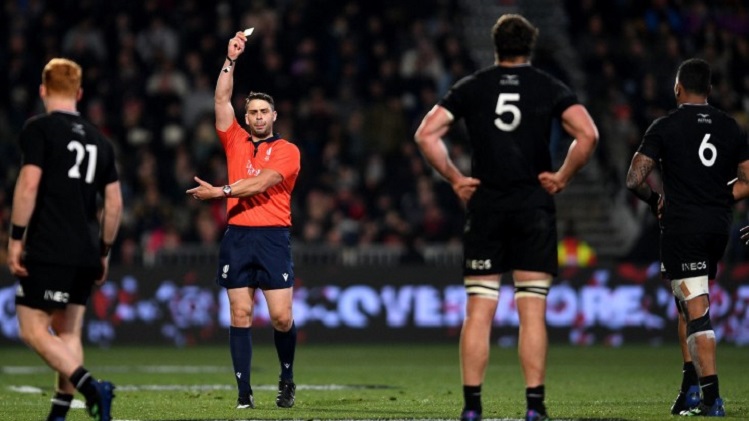 Match between New Zealand and Argentina. Photo from europop.ge

Q: It has become known that you are writing a book. Can you tell us what it is going to be about, and when Georgian rugby fans should expect its presentation?

A: The book will be about my rugby journey which started in 2007. My experiences, feelings, emotions, curiosities, pains, difficulties and victories will be shared to the readers. There is no exact time for its presentation as it depends on how things will develop in my career.

Q: Being a referee in the elite category of world rugby is not easy. From that point of view, what do you think made you come this far at the age of 28, and what advice would you give to those going down this path now?

A: It was a very difficult road and it gets more difficult with each new season. Since 24, I have been in an elite environment and I have faced so many difficulties that I could not even imagine. It is very difficult not to lose yourself in this environment, to maintain your niche, features, handwriting and establish yourself. I had to work and concentrate on many things, I had to change my regime, outlook and attitude. There was no entertainment, no laziness and no retreat. In this environment, you are constantly out of your comfort zone and this is already a common story - big games are accompanied by great pressure, all my actions are under scrutiny, therefore the responsibility is great.game. Elite referees are judged on a number of criteria, from physical shape to game management There have been times in my career - and there will be more - when I had to make tough decisions that would make a whole country [represented in the match] hate me, but it was necessary for the  and demonstration of effective rugby language skills. The list is long, but I think mental resilience is the main skill that drives my career forward and what I have to constantly work on.  If not for this skill, I would have failed at many points in my career. My advice for future referees is not to lose their individuality, to know what their niche is and work on making it better.

Q: How does your upcoming schedule look? Have you been invited to judge World Cup matches?

A: It is a little bit early to talk about this, as selection of referees [for the tournament] will take place in the spring, and until then no one knows which judges will be in the list. The competition is huge, so my upcoming performances will be of utmost importance. My primary goal is to do well in the difficult tests in November and then, already in December, to be in optimal shape for elite European club competitions.

Q: What is your prediction for the chance for Georgia to enter the Six Nations competition?

Six Nations is a private organisation and integrating into it is related to many aspects: the country’s rugby awareness, logistics, human and material resources, superior broadcasting, sales and flight availability. My personal prediction for now is that Georgia will not be accepted into Six Nations in the near future. The Georgian rugby union must strengthen work in all directions [in the meanwhile], with the state and individuals also participating. 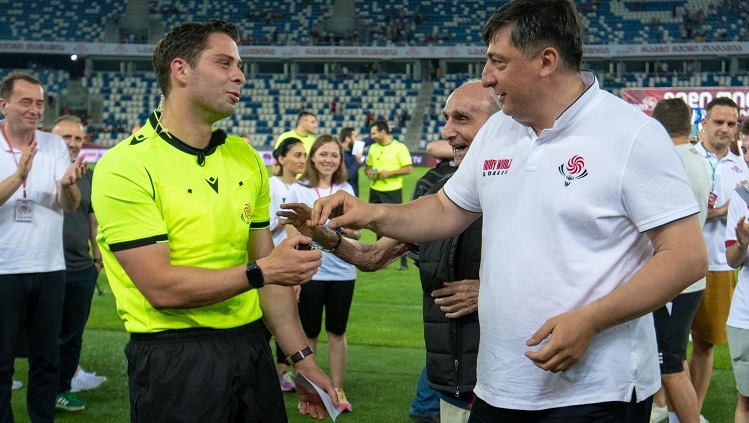 Q: What could you say about your collaboration with the Georgian rugby union?

A: The rugby union is actively involved in ensuring a safe environment for referees. I always feel their support in organising flights, arranging visas and accommodations. Their support is really highly appreciated.