Georgia’s iconic winter wonderland Gudauri is set to become a world-class ski resort, with new ski areas, new trails and all necessary facilities that will benefit tourists as well as locals.

Gudauri is a popular ski resort not only for Georgians, but foreigners as well, largely because it is a mere two-hour drive from Tbilisi, and resort is very accessible.

Taking into account its ski potential and the growing interest of winter adventurers towards the ski resort, Gudauri has become more and more crowded overtime and the necessity of its expansion has become inevitable.

Due to the growing number of visitors to Gudauri, the Ministry of Infrastructure and the Regional Development of Georgia have decided to expand the ski resort and create a joint resort area that will unite New Gudauri, Lower Gudauri-Seturebi and Kobi-Gudauri.

The first step has already made and a new cable car connecting Gudauri to Kobi - a village in Stepantsminda – has already been built and opened. The Kobi-Gudauri cable car covers over 7.5 km in about 15 minutes and can serve about 2,800 passengers an hour.

The construction of the Kobi-Gudauri ropeway started in 2018 and was completed in the same year.

This was one of the most complicated projects from an engineering point of view. This is the longest ropeway in Georgia, featuring 111 gondolas, six stations and three ropeways.

Georgian and French Companies (Peri and Poma) implemented the project. Difficult engineering works, including hanging the cables, were executed under the direct supervision of foreign specialists.

Around 200 people were employed and operating up to 40 units of heavy machinery for the ropeway construction.

Why is the development of Kobi-Gudauri important?

As the Kobi-Gudauri cableway connects Stepantsminda to Gudauri, it creates a joint resort area where there is the opportunity for constructing new hotels, food facilities and other touristic destinations.

Also, the Kobi-Gudauri cable car will help tourists enjoy a longer winter adventure as the location of the route on the northern slope enables skiers to ski until the late spring. The northern slopes are well-known for the quality of their snow.

The distance between Kobi and Gudauri is 15.2km and by car you can cover this distance in about 22 minutes – but since landslides and heavy snow can force the car route through Jvari Pass to shut in the winter, the new cable car will help commuters or skiers transport back and forth anyway. 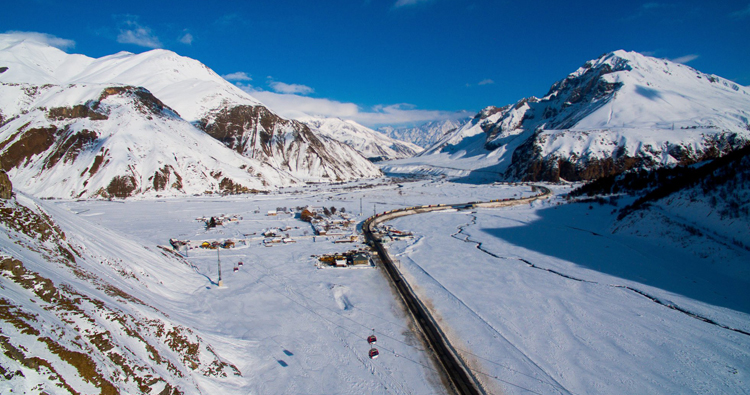 Kobi is a small village in the historical region of Khevi. Administratively, it is part of the Stepantsminda Municipality. Distance to the municipality center Stepantsminda is 20 km. Photo: Ministry of Infrastructure.

As the Jvari Pass is shut in the winter due to landslides, movement in between Georgia and Russia is also restricted. Thee Jvari Pass passes the Georgian Military Highway, which is a mountain road that crosses the Greater Caucasus Mountains and connects Tbilisi in Georgia with the Russian town of Vladikavkaz in North Ossetia.

As Kobi is being developed as a new winter resort of Georgia, travellers coming from Russian border are also able to stay and ski in Kobi. 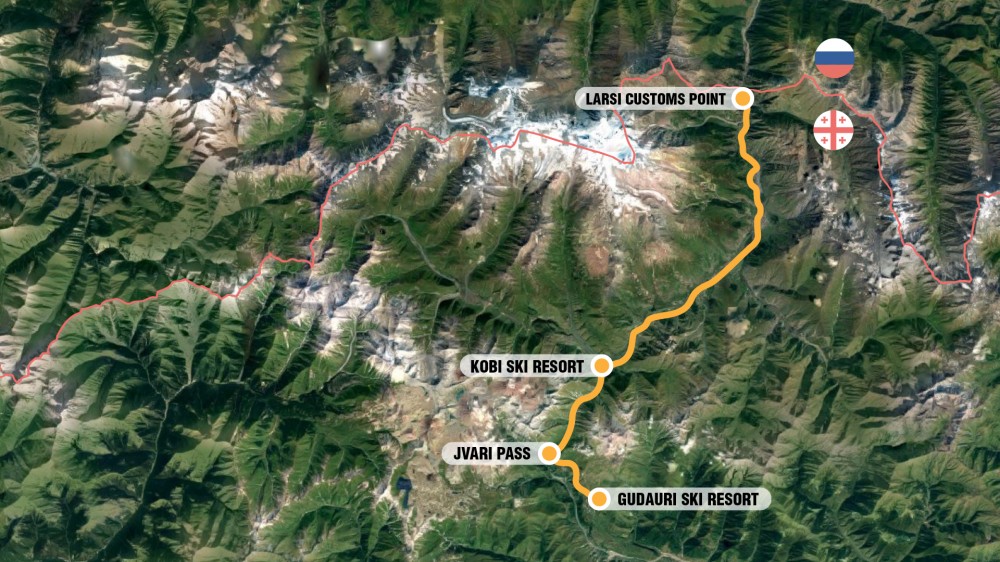 Since opening the Larsi customs point on the border with Russia, international transportation companies (from Turkey, Armenia and Ukraine), local people and tourists are actively using the  abovementioned road which has caused an uptick in the number of vehicles on the roads in the area.

Furthermore, the number of tourists coming to Georgia’s ski resort of Gudauri from Russia has also been increasing.

During the 2017-2018 winter season, the number of visits by land route of Russian citizens (age 15 and older) reached 130,187 in total, of which 29,465 visits were made in Gudauri, said the Georgian National Statistics Office of Georgia.

Other data from the Georgian National Tourism Administration show that the number of international visits from Stepantsminda (Larsi customs crossing point) reached 45,216 in December 2018 and 51,614 in January 2019.

The cableway is the basis for the development of Kobi territory, the general development plan of which includes the construction of multifunctional facilities such as hotels, residential buildings, commercial facilities, public parking, and food and service facilities.

The Kobi-Gudauri area has the capacity to host 1,800 beds which will be distributed in hotels and residential buildings.

As of today Kobi has the capacity to host 2,000 people. There is 2.4km-long trail, but it is planned to lengthen it to 10km and after that 2,800 people will be able to enjoy ski trails in Kobi per hour. 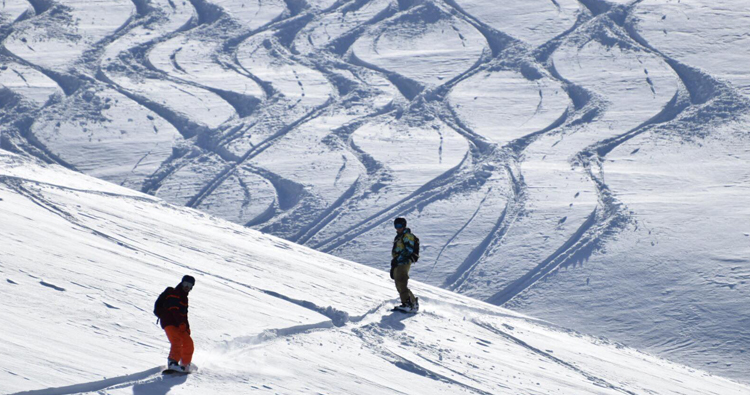 The development project for Kobi includes to lengthen trails to 10km that will enable 2,800 people to enjoy ski trails in Kobi per hour. Photo: Mountain Resorts of Georgia.

Growing tourism interest towards Gudauri makes its expansion inevitable. Georgia’s Ministry of Infrastructure has created a Land Use Plan for Gudauri, which main goal is to make the resort into four-season touristic destination.

First of all Gudauri development plan accents the development of sewerage and water supply systems in the resort.

This year the second stage of construction of water supply and sewerage systems launched in Gudauri. The project is financed by the Asian Development Bank. So far, there is no sewerage network.

Water supply systems also need upgrade in Gudauri. Works are due to be completed in summer 2020. Once the project is completed Gudauri will have 24hour water supply and the right sewerage system.

Entrance to Truso Valley is some 20 km south of Stepantsminda at the Kobi village. 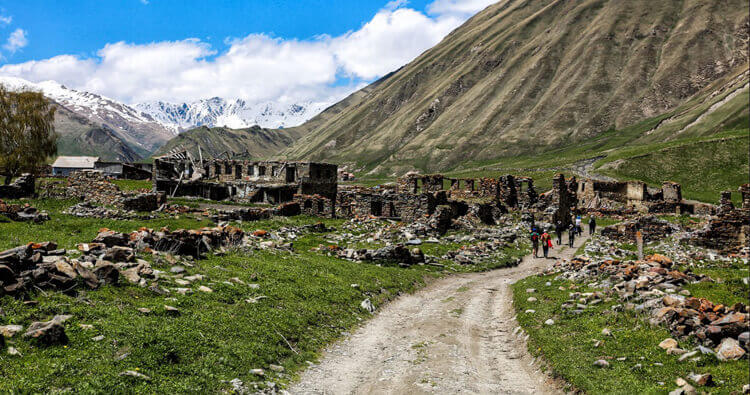 About 9 million GEL will be spent on development of the Truso gorge. Photo: Paata Vardanashvili.

By developing Truso gorge and Valley it is planned to further improve the touristic potential of Kobi as it is the gateway to Truso gorge. Road reaching the Truso gorge passes the Kobi village.

Projecting should be completed this year, while the works are planned to be launched in spring 2020. Estimated cost of the project is 9 million GEL (about $3.40m/€1.13m). The World Bank will finance the project.

Construction of 2-lane 22.7 km long asphalt-concrete road, six bridges and five tunnels is planned on Kvesheti-Kobi road, including construction of one nine km tunnel. The tunnel starts at Tskere village and ends at Kobi village, mentioned tunnel will pass under Jvari pass.

Kvesheti-Kobi section is a part of the North-South Road Corridor. The road passes through difficult geographical route and characterised with heavy snowfalls in the winter period. Due to avalanche hazard and adverse weather, traffic is often closed in winter and transit traffic is interrupted. Construction of a new road and 9-km tunnel will address pending issues. Unhindered transit traffic will be possible at any time of the year.

The width of the 9-km long Kvesheti-Kobi tunnel will be 15m.

A 500m arch bridge will be constructed on Kvesheti-Kobi road, the arch of which will be an unprecedented 300 m in length.

Kvesheti-Kobi road goes along the riverbed of Tetri Aragvi along 7-km section, passes through Arakveti village, then Serpentine starts from Kvemo Mleta. The road passes through Gudauri, crosses Jvari pass and ends at Kobi village; In total, the project will benefit nine villages.

The tunnel provides more secure and reliable conditions for passengers on the road in winter.

The road will also improve the livelihood conditions of inhabitants living in the gorge. They are isolated from the outside world in the winter and the villages of Khada are almost empty.

There are no grocery stores or pharmacies and medical assistance is not available. Because of the nonexistence of the road and severe weather conditions local people have to go to Kvesheti on foot, which entails many difficulties and risks.

The project will allow to maintain constant movement in the winter, improve road safety and carrying capacity, reduce the risk of road accidents and decrease the time of movement.