How I entered EU without visa

I have just returned to Georgia from a historic trip where, for the first time in my life, I travelled visa-free to the European Union (EU). How did I enter the EU without a visa? This is the question that so many of my friends and readers have asked me recently.

The European vision of wandering crooked cobbled streets and sipping cappuccinos in medieval squares sounds quite dreamy, but there are a few rules to follow when it comes to staying in Europe legally and avoiding trouble at the border.

Here in this blog I will tell you the story of my visa-free euro-trip and share my thoughts, impressions and experiences of the journey. Most importantly, I will answer the big question – how I entered the EU without a visa. 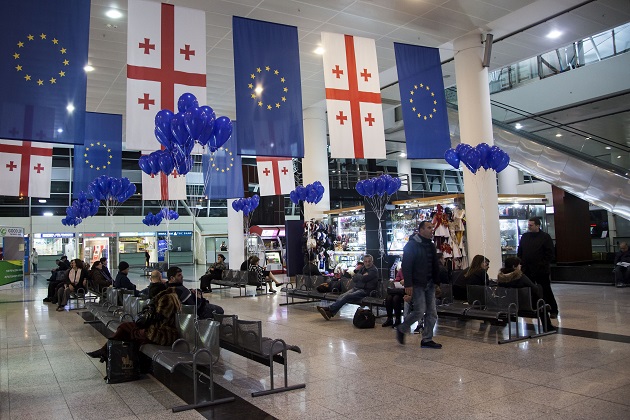 This is what Tbilisi International Airport looks like today in celebration of the EU visa waiver for Georgian citizens. Photo by N. Alavidze/Agenda.ge.

Europe without a Visa - Playing by the Rules

I started my first visa-free journey from Tbilisi together with a small delegation led by the Prime Minister of Georgia, Giorgi Kvirikashvili.

The route of this historic trip was Tbilisi-Athens-Brussels. We started our first visa-free journey on March 28, the first official day when the citizens of Georgia could cross the border of EU without visa.

With the leader of the Government on board of the historic flight, there were also a number of successful Georgian students, representatives of ethnic minorities, students residing near the occupied areas of Georgia, scientists and journalists present as well. 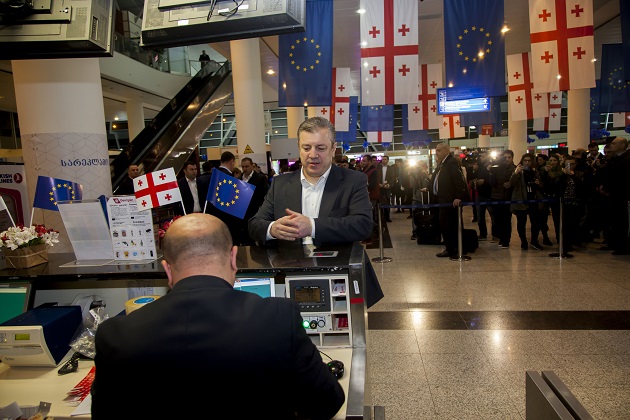 "This is a regular Georgian passport of a Georgian citizen that I will use to travel to Europe," said the Prime Minister of Georgia Giorgi Kvirikashvili before departing from the country. Photo by N. Alavidze/Agenda.ge.

We felt the very first emotions of the upcoming trip when we entered the Tbilisi Shota Rustaveli International Airport, which was all decorated with EU-Georgia flags, beautiful flowers, and blue balloons.

With my biometric (chipped) passport I checked in and passed through security check and passport control. During the passport control the border control officer asked me about the purpose of my trip and required to present her my return ticket, hotel reservation, travel insurance and proof of financial resources which should be €50 per day.

After providing all the necessary documentation, I received the first EU entrance stamp in my passport.

The first visa-free journey from Georgia began in Athens, Greece - the cradle of the European civilisation, and continued in Brussels, Belgium – the political heart of Europe. 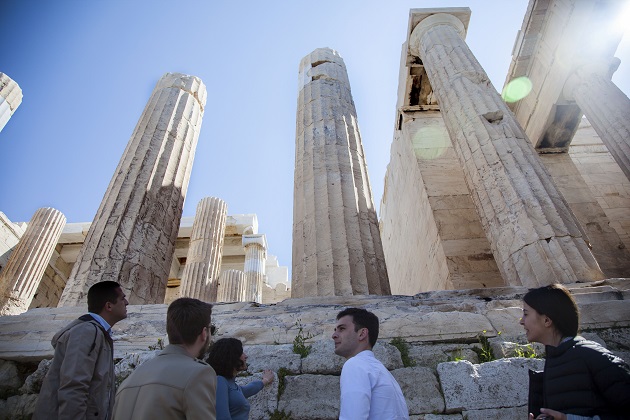 When travelling visa-free, you should take into account that sometimes, at passport control, you might be asked few questions, such as the destination and length of your trip as well as the amount of money you have to spend. However, this is not always the case, and depending on your ‘passport history’ and how reliable a traveler you have been, the border guard might simply wave you through.

Greece greeted Georgia with an enthusiastic display: the Georgian flag was flying in the airport and roads were closed to give a quick ride to the Georgian delegation from the airport to the National and Kapodistrian University of Athens, where a conference, "Georgia – from Europe to Europe,” was held. 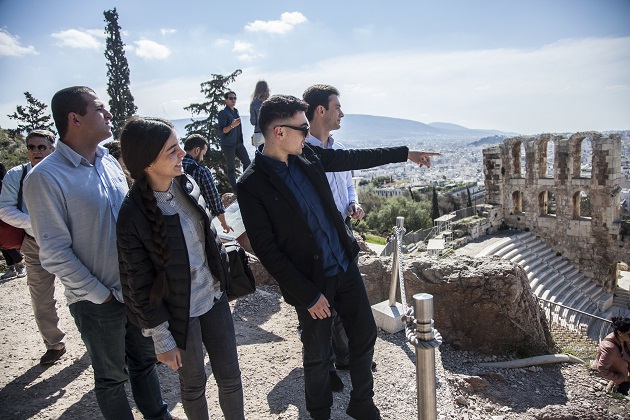 Georgian students had nice walk in Athens where they visited some of the city's ancient parts. Photo by N. Alavidze/Agenda.ge.

For Georgia the gate to Europe’s Schengen zone is Athens. As I made the first visa-free symbolic entry into Athens, I also made a step towards Georgia’s return to Europe,” said Kvirikashvili while delivering his speech at the Georgian-Greek conference.

Later, PM Kvirikashvili was welcomed by his Greek counterpart Alexis Tsipras, who said he was glad that Greece was hosting Georgia "on such an important day.” Meanwhile, Kvirikashvili congratulated Greece on its Independence Day.

2017 also marks the 25th anniversary of diplomatic relations between Georgia and Greece. 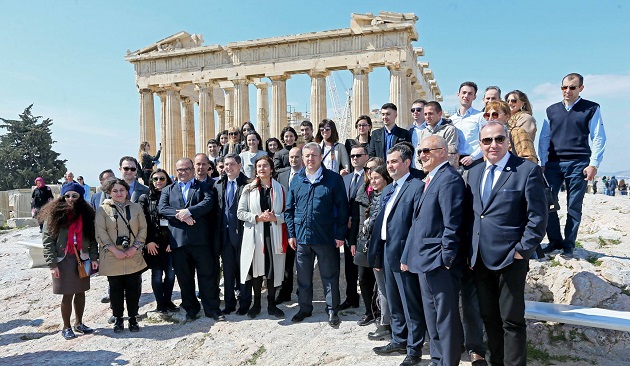 During his visit to Athens, Giorgi Kvirikashvili, together with students and scholars, enjoyed the site of the Athenian Acropolis Complex. Photo by the PM's press office.

After the meeting the Georgian PM led our visit to the Athenian Acropolis Complex, one of the city’s most significant ancient monuments, and the Parthenon temple. There we all took memorable photos and left the area as we headed to Brussels.

In the Heart of Europe

The celebration of the historic event of visa liberalisation continued in Brussels. It was so exciting to see the Georgian flag flying in front of the European Commission headquarters in Brussels to celebrate our EU visa waiver. 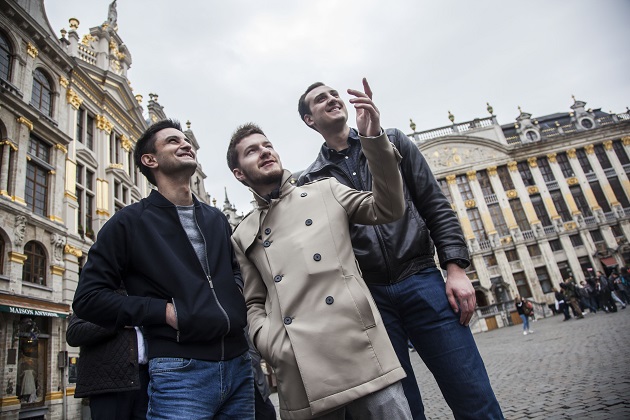 There, in Brussels, President of the European Council Donald Tusk hosted Kvirikashvili and congratulated him on the launch of visa-free travel to EU/Schengen Area member states, and expressed his hope that Georgia will remain similarly determined to achieve goals of the European integration agenda. 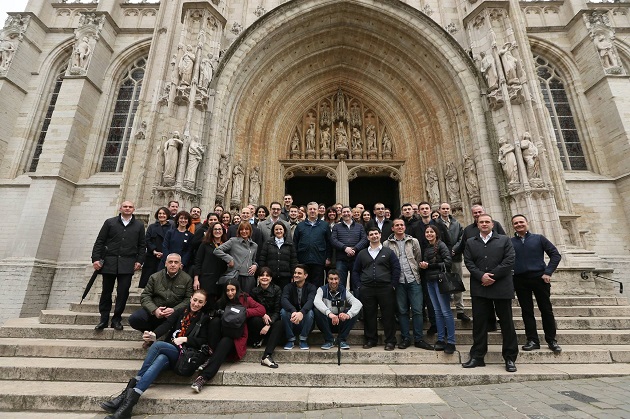 We took memorable photo at one of the cathedrals of Brussels. Photo by the PM's press office.

Kvirikashvili later thanked Tusk for his personal contribution to Georgia's visa liberalisation and congratulated him on his re-election as President of the European Council.

After this meeting, we moved to the European Commission where its president Jean-Claude Juncker welcomed Kvirikashvili: "Mister Prime Minister, welcome to Brussels on this historic day for the people of Georgia and the European Union.”

Kvirikashvili talked about the steps planned by the Government of Georgia to achieve visa-free travel, including implementing measures to prevent Georgian citizens from violating EU foreign visitation laws or increasing the amount of illegal migrants and asylum seekers. 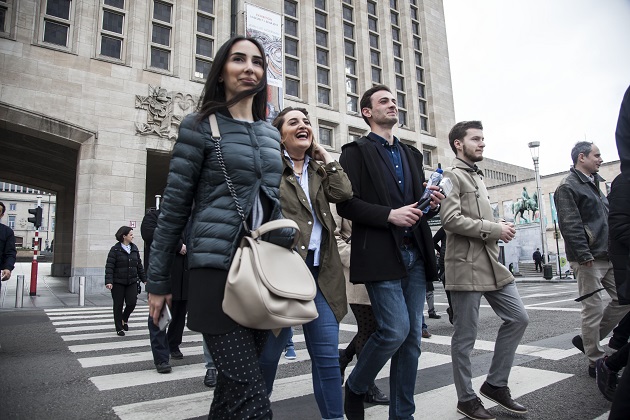 As part of his visit to Brussels,Giorgi Kvirikashvili, in the company of the young members of the Georgian delegation, strolled along the streets of the historic neighborhood of Brussels. Photo by N. Alavidze/Agenda.ge.

Kvirikashvili referred to the launch of visa-free travel as a very important event for Georgia's population, including those in the occupied territories.

This was the last official meeting of the trip, and the next day Kvirikashvili took us for a walking tour of the historical neighborhoods of Brussels. 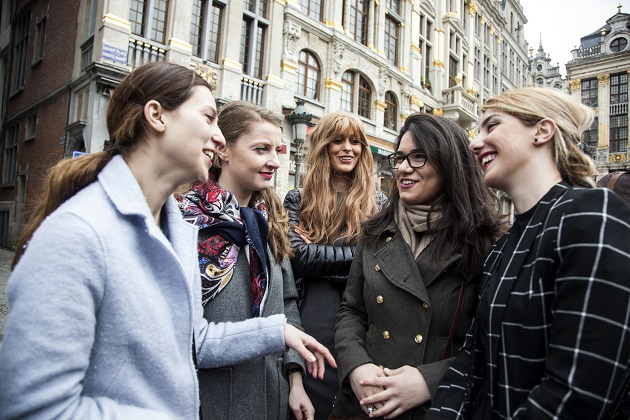 This is a group of young Georgian students who study in Belgium. Photo by N. Alavidze/Agenda.ge.

Most of the young people admitted in a conversation with the Prime Minister that it was their first time in Europe, which, to their delight, coincided with this historic date.

It is my first time traveling to Europe, and I could've never imagined that it would coincide with this historic event, the coming into force of visa-free travel. I am excited to join the Prime Minister in this historic visit,” said Tbilisi State University student Tamar Mirianashvili. 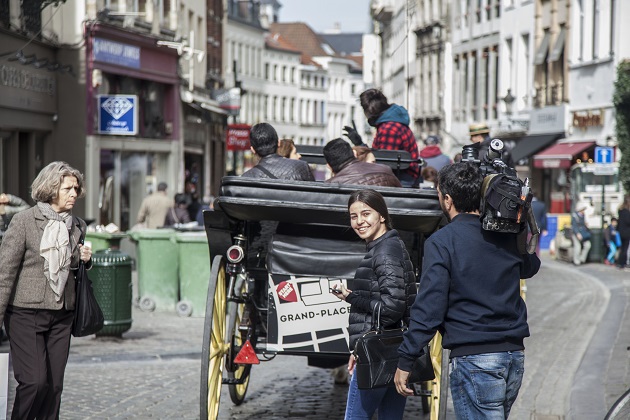 I am happy to be part of this historic event. EU visa liberalisation is equally important to those living across the dividing line, because they are part of our state. I believe that they, too, should use this opportunity, and I hope that it will be another precondition for our unification," said Nika Markozashvili, a resident of the border village of Ditsi. 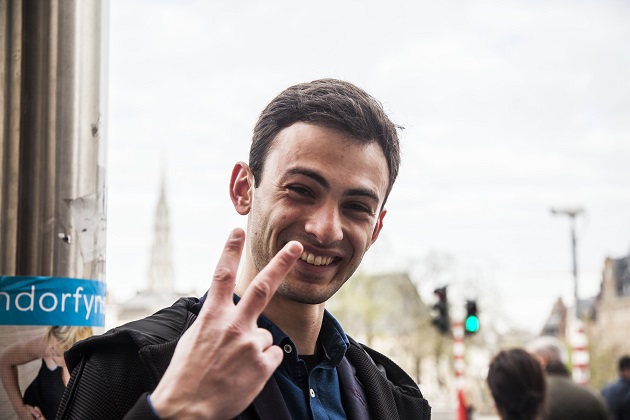 Our group of young people was joined by Belgian university students, who took pictures with the Prime Minister.

After the nice walk in Brussels, we went to the airport and returned to Georgia.

Tbilisi residents celebrated the milestone – the EU visa waiver - with a number of events.

Starting on March 26, various concerts were held in the city against the backdrop of the iconic Tbilisi TV Tower and Bridge of Peace, both which were illuminated by the colours of the flag of the European Union.

The night came to an end with a large firework display. 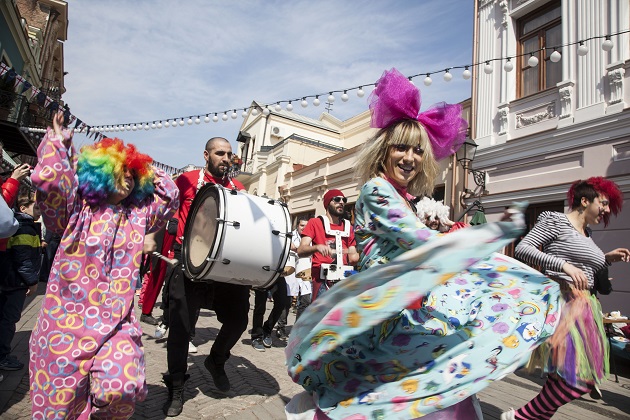 Tbilisi residents spoke with Agenda.ge and shared their excitement.

This is a very important day for Georgia - a day that we will remember forever. This is not only an opportunity to travel to the EU without any obstacles, but it is also a recognition of the achievements Georgia has made on this long path. I have felt like a second-rate citizen for these years, when we had only expectations but no actual results. But that is over now. I truly feel I am European now,” said Maya Sulaberidze, 43, with a wide grin at the concert on Aghmashenebeli Avenue where she had joined her friends.

26-year-old Lana Piranishvili said, "Today I am very happy and satisfied that we can now travel visa-free. I first saw the news on Facebook. All my friends were sharing this exciting news, and I decided to join the celebration in real life and came to attend this concert. I am here with my little children who don’t understand what an important day it is for Georgia. But when they grow up, they will enjoy the benefits.” 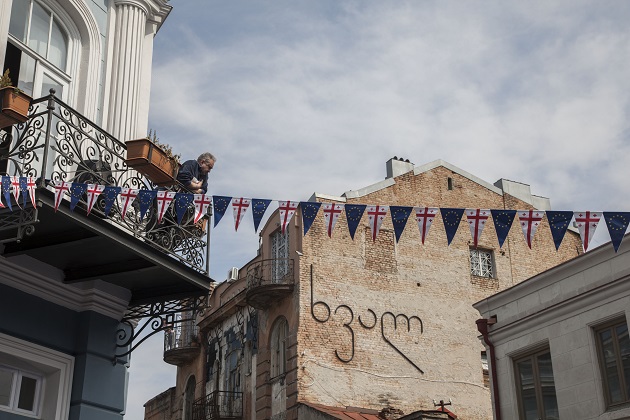 Georgia-EU flags hanging in the streets of Tbilisi. Photo by N. Alavidze/Agenda.ge.

Despite the fact that poverty is still widespread in Georgia, despite the difficult times Georgians are facing now, we are still happy with the decision the EU parliament made today. This is a hope for us, hope of a beginning for a better era and a better life. Now we are more optimistic about the future. It is also an important political decision for Georgia, as it is the first signal that the EU is opening its door to Georgia,” said Ani Chemia, 65.

Diana Chichua, 30, and Davit Simonian, 54, however, were a bit more sceptical, citing the gap between Georgia’s economy and the costs of travel in the EU.

I don’t understand why people are so happy about visa-free travel to the EU. Do they now have money for travelling? Is the currency crisis over in Georgia and has the lari started gaining value? I couldn't travel to the EU before and I will not be able to afford it now. What has changed for me? Money is more important than visas for travel. The economic situation should be improved in Georgia and when that happens, well – that day I will celebrate the brighter future of the country,” said Chichua. 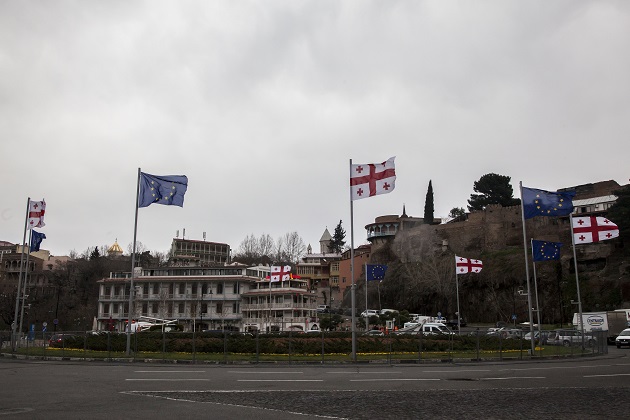 Georgian and EU flags are flying at the Europe Square in Tbilisi. Photo by N. Alavidze/Agenda.ge.

The only good thing is that people will not pay money to get a visa. My son was barely able to save money to travel to Italy last year, and then he had to pay about 140 lari for the visa. Today my son is happy and I am happy, too. But for me nothing has changed. I will keep coming to this same place [Kolmeurneuba square] and sell books as I did previously,” said Simoniani.

The visa liberalisation agreement between Georgia and the EU was launched in June, 2012, and entered into force on March 28, 2017.

In February 2013, the Visa Liberalization Action Plan (VLAP) was presented to Georgian authorities. 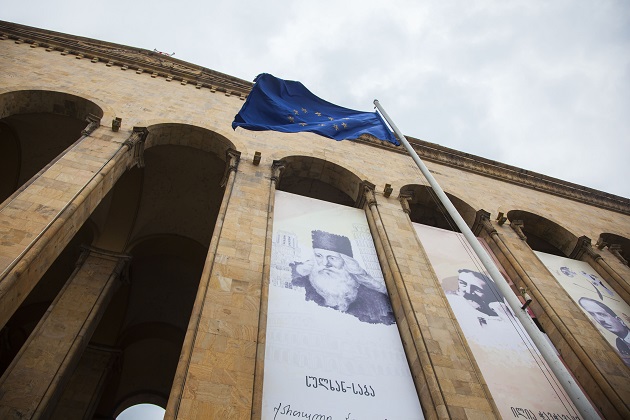 Georgian citizens can now enter the European Union visa-free for 90 days within a 180-day period. Photo by N. Alavidze/Agenda.ge.

The European Commission’s December 2015 progress report stated that "given the outcome of the continuous monitoring and reporting carried out since the launch of the EU-Georgia Visa Liberalisation Dialogue, the Commission considers that Georgia meets all the benchmarks set in respect of the four blocks of the second phase of the VLAP.”

Georgian citizens can now enter the European Union visa-free for 90 days within a 180-day period, whether it be for tourism, family visits, or business.