John Noble, the author of the best-selling guide book on Georgia, visited Tbilisi in early June for the regional launch of Lonely Planet’s 5th edition Georgia, Armenia & Azerbaijan guide. Speaking to Agenda.ge after launching the book at Prospero’s Books, Mr Noble recalled several fond memories of his adventures in Georgia.

The year was 1990 when John Noble first visited Georgia. The country was going through its separation from the USSR and tourism in Georgia had just started to open up when Mr Noble had the opportunity to visit the South Caucasian nation. He came to explore the foreign land and source content for the first Lonely Planet travel guide on Georgia, which was then part of the Soviet Union edition. That first visit left an imprint on the author and Georgia would soon come to be his favourite country to write about for Lonely Planet.

It was a time when there were no organised tours and you had to book your whole trip in advance and reserve every night in hotels; you had to decide your entire itinerary before you’d even set foot in the country,” Mr Noble explained.

"After four months travelling through Russia and Belarus I made my way down from Vladikavkaz and into Georgia and came through the Dariali Gorge and I arrived in Kazbegi and [the locals] were totally not expecting any visitors. At the time it was quite clear the Soviet system was being broken down on this side of the Caucasus and that meant [Georgia] was a much freer place, which was great.

"I hiked up to the Gergeti Church and inside there were four guys who were eating food and drinking wine. They looked at me and asked if I was Russian, which I replied no, then they broke out in smiles and invited me to sit down and join them in their picnic. By the time we made it down the mountain we were all quite inebriated. I remember catching donkeys and trying to ride them.” 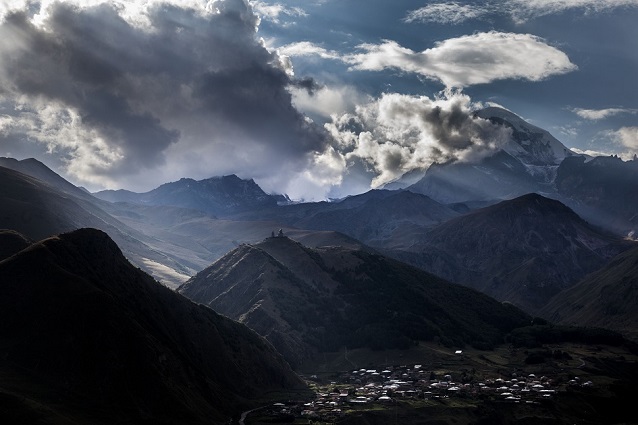 Georgia on his mind

This first memory of Georgia is something Mr Noble will never forget. Fast forward 26 years and the London-born writer has ventured back to Georgia six times and written three Georgia editions of Lonely Planet. Georgia, Armenia and Azerbaijan are lumped together into one regional guide book but Mr Noble believes Georgia deserves its own edition.

"If it were up to me of course there would be a solo book but unfortunately it’s not,” he tells the audience at Prospero’s Books. "I think Georgia has reached the stage where I could easily have done a book alone on Georgia and it would be commercially viable but I’m still waiting for [the bosses] to come around to the idea.”

Prospero’s Books sells hundreds of the Lonely Planet Georgia, Armenia & Azerbaijan guide, and the shop’s co-owner Peter Nasmyth tells Agenda.ge that that particular edition is the most popular guide book they sell.

In the latest Lonely Planet Georgia, Armenia & Azerbaijan edition, published in May 2016, Mr Noble had less than 100 pages to show off the best of Georgia. The new version has "squeezed in” several new additions – such as Vashlovani Protected Areas and other places around Kutaisi including Prometheus Caves and the Okatse Canyon. The book also goes into more detail about already-mentioned sites, from Kakheti region in the east to Abkhazia in the west.

The guide book describes hundreds of places to visit, things to do, where to eat and stay – almost all of which Mr Noble experienced firsthand – but he says he was limited by space and there was a lot he had to leave out.

Racha. I have so many lovely things I could write about Racha, and Kvemo Kartli is also a very interesting region. And Javakheti as well. I need another 200 pages to write what I want but instead I only had about 90.”

The latest Lonely Planet Georgia, Armenia & Azerbaijan 5th edition was published in May and released at Prospero's Books in Tbilisi in early June 2016. Photo by N. Alavidze/Agenda.ge.

Originally from the UK, Mr Noble has lived in Spain for 20 years and written for Lonely Planet for the past three decades. For this new edition, he came to Georgia last year and spent seven weeks travelling the country before returning home and writing up the new content over two months. Each year he travels for three to four months to a different country finding content for the next Lonely Planet edition he’s working on. The Georgia Lonely Planet guide is completely updated about every four years and Noble has written three of the five editions on Georgia.

Four writers contributed to the 5th Lonely Planet Georgia, Armenia & Azerbaijan guide book however Mr Noble was the sole writer who compiled the Georgia section of the book.

How did he get into writing for Lonely Planet?

With a flair and enthusiasm for writing, Mr Noble started his career as a newspaper journalist in England. "But I kept taking time off to go travelling so I had the idea to ask the guide book company if I could write for them and here we are some 30 years later”.

In total Mr Noble has written Lonely Planet guides about 17 different countries and from those, his two favourite countries are Georgia and India, "without a doubt”. 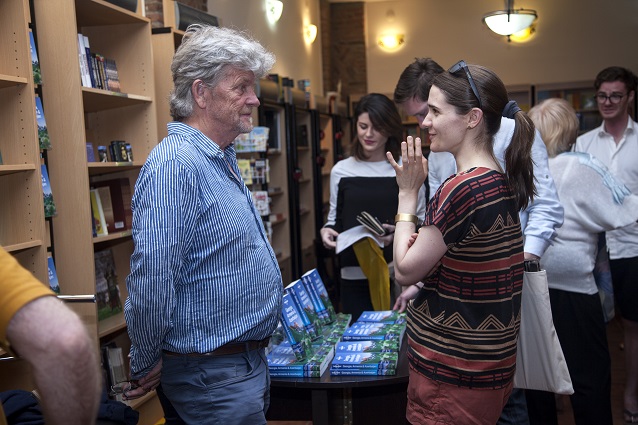 After visiting Georgia first in 1990, his next opportunity to return was in 2007. Much had changed but some things remained the same. He was excited to once again eat delicious Georgian food, drink chacha and mingle with the Georgian people.

The Georgian people are the most warm and hospitable people. I have never experienced people quite as hospitable anywhere else in the world”.

Georgia has so many plus points to promote itself with; it’s natural beauty, the wine, the hospitality and more. This is a country that really is wonderful. I personally love the mountains and the Caucasus are just stunning.”

Prospero’s Books co-owner Peter Nasmyth said he was honoured Mr Noble made the trip to Georgia’s capital to celebrate the guide book’s launch. 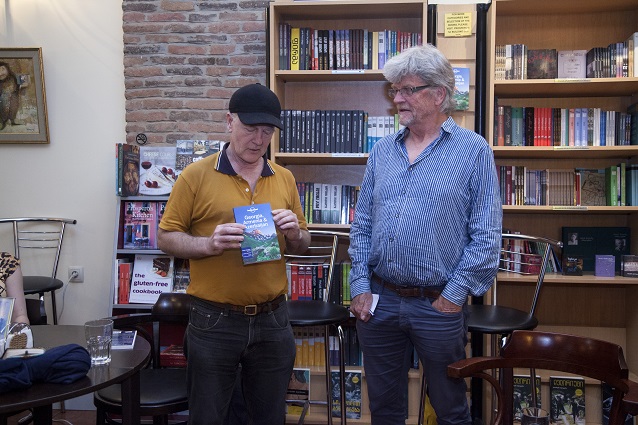 Mr Nasmyth co-established Prospero’s Books 17 years ago to promote Georgia and offer English-language books to the city’s foreign residents. A keen author himself, Mr Nasmyth went off the beaten track and explored parts of Georgia that many had forgotten about and produced a book Walking in the Caucasus that offered detailed information about walks and hikes in Georgia.

Despite not living in Georgia permanently, Mr Nasmyth returns to Georgia for several months each year to keep exploring the country. Why? "There’s just something about Georgia. The mannerisms of the people, the landscape and the nature. It’s hard to explain but I do love this place.”

As for Mr Noble, ever since he visited Georgia 26 years ago when the country was forging its way towards independence, Georgia has held a special place in his heart.

I first came in 1990 for the first Lonely Planet guide on Georgia and I’ve loved the country ever since.”