The European Bank for Reconstruction and Development (EBRD), with more than 20 years of activities in Georgia, is the largest institutional investor in Georgia, having invested over €2.6 billion in some 178 projects in numerous sectors of industry.

EBRD President Sir Suma Chakrabarti addressed local and international media on the final day of the 24th EBRD Annual Meeting in Tbilisi. He spoke of Georgia as "one of the star countries of our operation”.

Georgia is the best investment climate among all our countries of operation … and is the leader in terms of doing business,” said Sir Suma.

Georgia today has one of the most liberal policy frameworks in the world. Georgia has good transportation links with the entire region and beyond, a free trade agreement with Turkey and CIS countries and an Association Agreement with the EU, said the EBRD in a special statement to Agenda.ge.

2014 was a record year for EBRD investments in Georgia where some €215 million was invested in 13 projects. And in the few days during the Annual Meeting in Tbilisi the Bank signed six new transactions for Georgia for a volume of €26 million (about 70million GEL). These projects signed at the EBRD Annual Meeting "virtually doubled” the business done this year to date, both in volume and number of project terms. 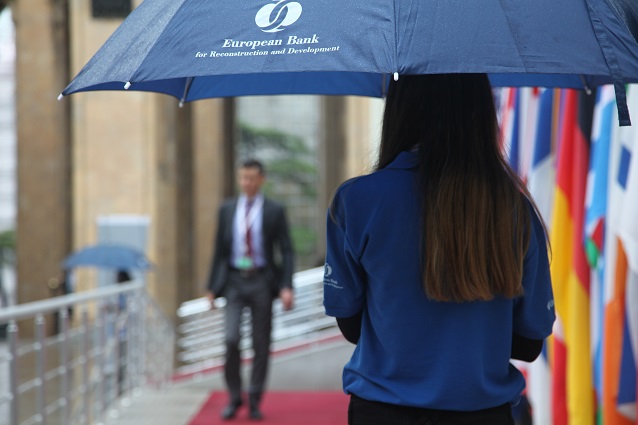 The Bank signed six new transactions for Georgia for a volume of €26 million (about 70million GEL) on May 13-15 2015. Photo by N.Alavidze/Agenda.ge

The Bank’s commitment to Georgia now and in the future is clear – choosing to host the annual EBRD event for the first time in the Caucasus region brought top government officials from more than 60 countries, heads of international institutions, global decision-makers, corporate executives and many more to Tbilisi.

When questioned by Agenda.ge about the Bank’s operations in Georgia, President Suma said developing the energy sector was a big part of the Bank’s recent efforts.

Hydro power is very important and Georgia is blessed with very good water resources and it can use these resources both for its own needs and also to export to regional markets, like Turkey. That’s a very big part of what we’ve been doing which will continue,” he said.

EBRD President Sir Suma Chakrabarti tasting Georgian wine and seeing the products made in Georgia at the Annual Meeting in Tbilisi. Photo by N.Alavidze/Agenda.ge.

"We also have been very involved in the banking sector and we are shareholders in several banks here. The banking sector here in Georgia is one of the very best amongst our many countries of operation - two Georgian banks are now listed on the London Stock Exchange.”

"Then we’ve also been really trying to help with the SME sector through credit lines, which really try and target those SMEs and create jobs and spread development to the regions as well, not just in the capital city.”

Looking ahead the EBRD’s strategy for Georgia will focus on the development of the private sector, including of SMEs, continue supporting the energy sector and helping Georgia realise the value of its geographic location.

The Bank’s Regional Director for Caucasus, Moldova and Belarus Bruno Balvanera also had good things to say about Georgia.

In a Question and Answer format, he told Agenda.ge that Georgia was "the leading reformer” in the EBRD region and many steps had been taken to develop the country’s internal business practices and investment potential.

It’s clear the EBRD believes in Georgia's potential; what are some of the attractive qualities of Georgia?

"Georgia is the leading reformer in the EBRD region and stands 15th in the World Bank doing business survey. That is an enormous achievement. Many steps have been taken to reduce corruption and red tape. Obviously a great deal more has to be done to maintain this and then to build further on it. But Georgia also has enormous potential, based partly on its geographical location, being a bridge for commerce between Asia and Europe.” 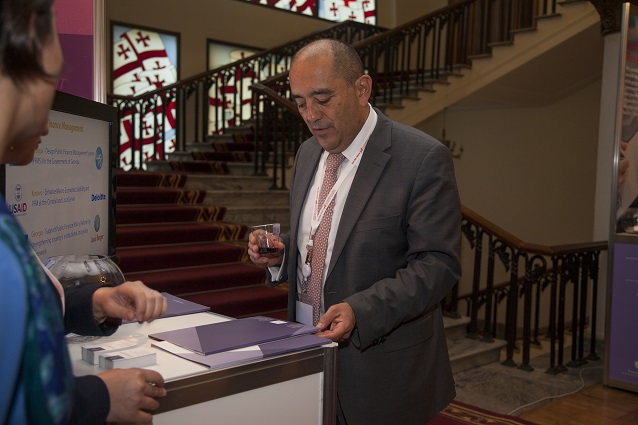 Bruno Balvanera, The Bank’s Regional Director for Caucasus, Moldova and Belarus, at the exhibition of Georgian companies during the Annual Meeting in Tbilisi. Photo by N.Alavidze/Agenda.ge.

What sectors have potential for development?

"We are working on some key energy projects, to make the most of one of Georgia’s most valuable natural resources – its water. Its hydro power plants produce electricity for export, for example to the fast growing market of Turkey. So this has trade benefits as well. We are also a strong supporter of Georgian’s banking sector and have helped to promote capital market development with pioneering bonds issues in the local currency. This is particularly important to help reduce currency risks. And we help small and medium sized enterprises, which are important for job creation.”

"Investing in municipal services helps to improve the quality of life for the people of any country and as I have already indicated good growth in the SME sector helps to provide employment and again raises living standards. This is an important contribution to society.”

What is the western view of Georgia as a potential investment country and business environment?

[Georgia gaining] 15th place in the World Bank tables is an extraordinary achievement which is a strong external endorsement of the work done so far by the Georgian authorities.”

Overall, how would you rate Georgia's role as hosts of the 24th EBRD Annual Meeting? What were your impression sand what could Georgia do differently?

"This has been an excellent meeting where we carried on our work here. The venues have been superb and the organisation has been first class. All the local staff working to support the meetings were extremely helpful and I would like to thank them as well as the authorities themselves who worked so hard to make this a success. Georgia has made great strides forward and is determined to carry on down this path. The EBRD will support the country as a strong partner.”