Riga Summit: View from inside

Georgian citizens have a very clear perspective of enjoying visa free travel to Europe from the beginning of 2016; this was the main message for Georgia from European leaders who convened at the fourth Eastern Partnership (EaP) Summit in the Latvian capital Riga on Friday.

However, the European Union (EU) officials also declared this would only happen if Georgia carried out "required reforms” and fulfilled "all benchmarks” of its Visa Liberalisation Action Plan (VLAP) by the end of this year. 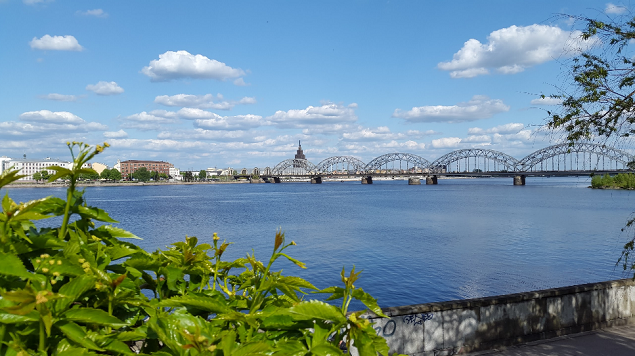 Georgia's Prime Minister Irakli Garibashvili said a political decision had been made regarding Georgia's visa free regime and only technical procedures now need to be finished.

So what exactly are these "technical details" that no one actually talks about, but Georgia is required to complete in the upcoming several months in order to be granted visa free travel to Europe next year?

The EU has identified four main areas which Georgia needs to reform and improve. This involves:

All of these fields involve several benchmarks, some of which Georgia has already fully achieved but some still need to progress further.

These are the fields the country has already succeeded in:

Meanwhile these are the benchmarks the EU said were on the right track, almost fulfilled, but still needed further progress:

At the EaP Summit European experts provided Georgian authorities with recommendations on how to achieve the benchmarks which have not yet been fully achieved.

Now the Georgian Government needs to take action to improve all of the above mentioned fields, which will give a green light to Georgian citizens to travel to the Schengen area without a visa in about half a year's time.

Prior to the Summit the Georgian side expected a specific date of visa freedom perspective would be mentioned in the declaration. Georgia specifically mentioned this in its Summit expectations list.

As well as this, Georgia also wanted to take a closer step towards the EU by having a clearer statement about Georgia’s European future in the text.

This was one of the requests of the Eastern Partnership’s Civil Society Forum too. During the Forum a small rally congregated in front of the Summit venue in Riga and urged the EU to grant Georgia and Ukraine visa free regimes and recognise their European future. The rally was held outside the official building while EU officials and their Eastern partners discussed the declaration text inside. 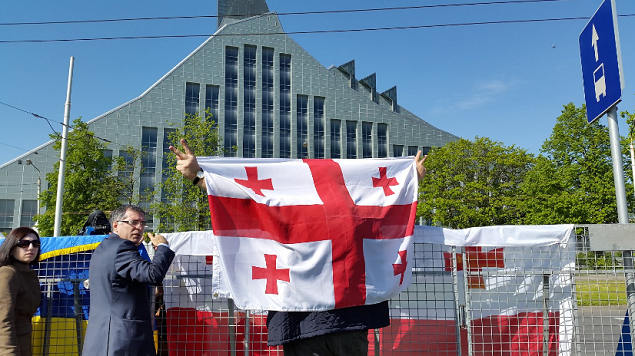 Georgian and Ukrainian flags at the Civil Society Forum rally in front of the Riga National Library on May 22, 2015; Photo by Nino Alavidze/Agenda.ge. 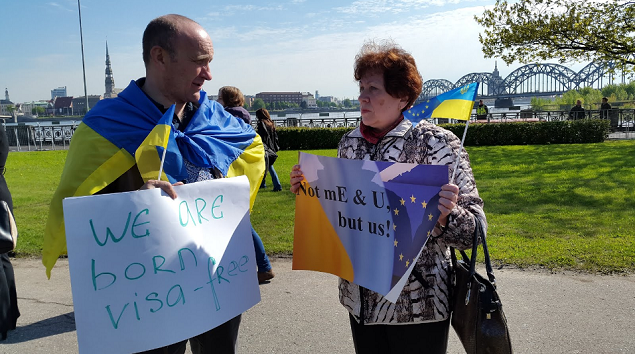 The rally demanded a visa free regime and an EU future for Georgia and Ukraine; Photo by Nino Alavidze/Agenda.ge.

One of the rally's organisers Lasha Tugushi told Agenda.ge after the declaration was issued that his main demand was Georgia and Ukraine to be promised a "European perspective”. He believed this was not achieved at the Summit.

Meanwhile European Council president Donald Tusk said in Riga: "Our intentions remain just the same as they were five years ago”. That meant he reaffirmed an earlier acknowledgement of Georgia and Ukraine’s European aspirations but no further perspective was mentioned in Riga. 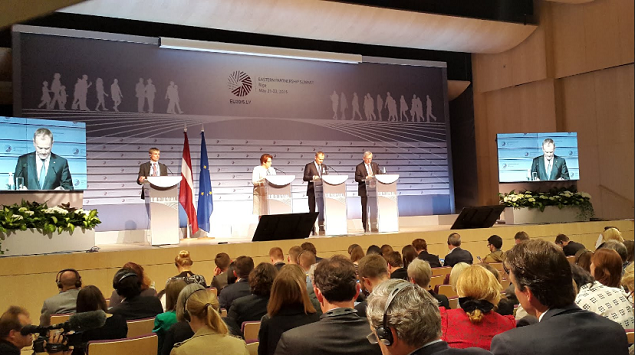 At the Riga Summit final press conference Donald Tusk said: "With regard to Georgia and Ukraine, which are the closest in line to achieve the objective of visa free travel, President Juncker and myself are determined to be as ambitious as possible in terms of seeing this process to a successful finalisation. But it is of course also up to Georgia and Ukraine to set the pace when it comes to fulfilling the necessary steps." Photo by Nino Alavidze/Agenda.ge.

In interviews with journalists, European leaders reconfirmed their readiness to help their Eastern partners make their European dreams tangible.

"Estonian and Latvian reforms experiences are very valuable for them. We know what it is like to become a member of the EU; we had this experience lately. So I think it makes sense that everything we know, we share with our friends and colleagues.”

Meanwhile knowledge and experience was not the only thing the EU shared with Georgia, Ukraine and Moldova in Riga. The 28-nation organisation reconfirmed these three EU Associated countries would receive further financial support from the EU. These new investments of more than €2 billion (5.3 billion GEL), plus an additional €200 million (530 million GEL), will be offered to support reforms and strengthen the three countries' economies.

All of the six EaP states (Armenia, Azerbaijan, Belarus, Georgia, Moldova, and Ukraine) are former Soviet countries, whom Moscow still wants to keep under control.

Russia’s Foreign Minister Sergey Lavrov said before the Riga Summit that relations between the EU and its Eastern partners should not damage "the legitimate interests of the Russian Federation”.

Whatever Lavrov meant by this, the EU leaders once again stressed in Riga that the Eastern Partnership was aimed to improve international relations and it was not directed against anyone.