The Chair of Lithuanian Committee on Foreign Affairs Žygimantas Pavilionis held meetings with the ruling Georgian Dream party and opposition United National Movement amid the current political crisis in the country earlier today.

Ahead of the arrival the Lithuanian MP said he was flying to his ‘beloved’ Georgia to meet with friends from all political spectrum ‘on the mission of unity on key strategic goals' - Georgian membership in EU and NATO - which is 'fully supported by all Lithuanian political parties’.

During his Tbilisi visit Pavilionis met with the chairs of parliamentary foreign relations and EU integration committees, Nikoloz Samkharadze and Maka Botchorishvili, respectedly.

Meeting with a great friend of GE✌️"Either ???????? goes in ???????? way or it turns into Belarus. When we were entering EU and NATO, left and right always worked together. We never imprisoned anyone. If repressions and conflicts continue, Georgia's chances will be killed" @ZygisPavilionis pic.twitter.com/JEVZ9V6Ubb

The Baltic Times reported on February 18 that the Board of the Lithuanian Seimas held ‘an emergency meeting’ and decided to send Pavilionis to Georgia ‘to help to resolve the ongoing political crisis in the country’.

I have old personal input from the times of President Valdas Adamkus. I led the Georgia group in the past Seimas, I have many friends on both sides and I am going to try to reconcile them", Pavilionis was then cited as saying.

Expressing concern over the recent political situation in Georgia, the Lithuanian Foreign Ministry has also called on Georgian authorities and the opposition ‘to refrain from actions that might lead to further stalemate and division of society, also to refrain from possible use of force against citizens’.

Unrest in Georgia was sparked after the recent Tbilisi City Court ruling which said that Melia be remanded into custody for failure to post bail for his release in a case that dates back to the June 2019 protests.

Georgian Interior Ministry has temporarily postponed Melia's detention following the resignation of Georgian Prime Minister Giorgi Gakharia, who said upon his resignation that he failed to make an agreement with the ruling party over Melia’s case. 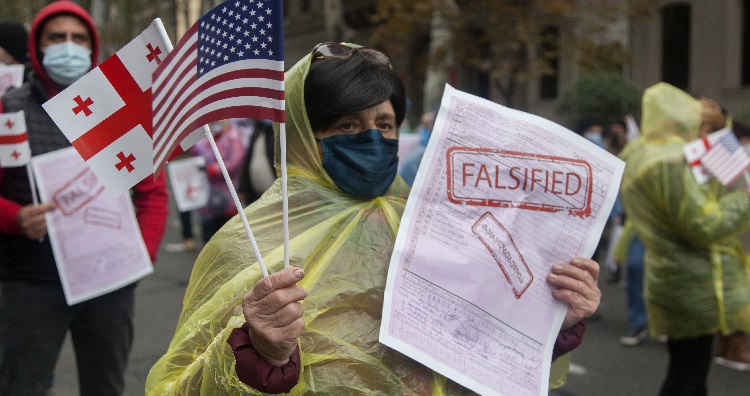 Opposition parties and their supporters have been holding protest rallies since the recent parliamentary elections in Georgia. Photo: Nino Alavidze/Agenda.ge

Although Gakharia said Melia’s arrest was legal, he claimed his detention amid the current political crisis would threaten further destabilisation in Georgia. However, the ruling party found his reasons ‘weak'.

Responding to the opposition’s demand the ruling party however says any discussion on holding repeat parliamentary elections is ‘speculative'.