Topics of climate change and global security, as well as work of Georgian institutions for facilitating green growth, were on the agenda in Tbilisi on Wednesday, as the Ministry of Environmental Protection and Agriculture of Georgia, the Embassy of Italy and the Embassy of the United Kingdom co-hosted an event in the run-up to the UN Climate Change Conference (COP26).

Speaking for the audience involving Georgian officials, diplomatic representatives, civil society and academic community, Davitashvili introduced efforts being undertaken by the Georgian government for combating climate change, while also expanding on the significance of COP26, where the country's representation will be led by Prime Minister Irakli Garibashvili.

Pre #COP26 Conference hosted in Tbilisi by the ???????? and ???????? Embassies and the ???????? Ministry of Environment. Interactive discussion about Climate Change & policies aimed at addressing it. Active participation by ???????? youth representatives. Find out more here: https://t.co/5mcQ84Q3k7 pic.twitter.com/OYurQy3Dwl

The UN conference - set to be hosted between October 31-November 12 in Glasgow - was the subject for remarks by ambassadors Moran and Clayton, who noted the aspiration of going further than the commitments reached by governments from around the world at the 2015 UN Climate Change Conference in Paris.

On his part, ambassador Valvo - whose state is partnering the UK in the Glasgow conference - detailed the importance of the year 2021 in efforts against climate change and the role of Italy, both as the conference partner and in the country's G20 Presidency.

The opening addresses were followed by two panels hosted by the organisers, with the first covering the matter of climate and security in the Euro-Atlantic region and beyond, and involving representatives of think tanks and Georgian civil service. 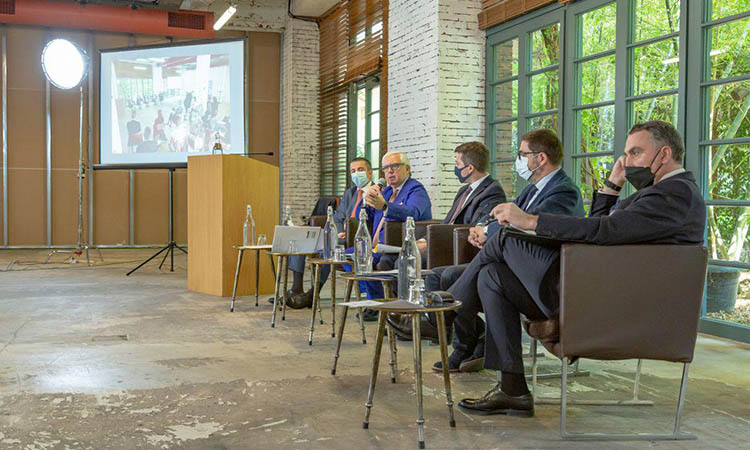 Involving diplomatic corps, Georgian officials, representatives of climate think tanks and activists, the event was hosted in the run-up to the COP26 conference that opens later this month. Photo via Embassy of Italy in Georgia.

The panel included a talk by Prof. Andrea Margelletti, President of the Italian think tank Ce.S.I Roma, on efforts ongoing in this direction at NATO. Margelletti's participation in the Tbilisi event was facilitated by the Italian embassy.

In the second panel of the event, the topic was focused on Georgian institutional and activist work for environmental concerns, with implications of climate change for the country discussed. The segment included a presentation by Elene Samukashvili, a young climate activist from Georgia who featured at the #Youth4Climate event in Milan last month.

Samukashvili shared her experience from the youth event - organised in the run-up to COP26 by Italy - and brought forward proposals on environmental preservation for future generations.