A collector coin depicting an episode from acclaimed Georgian epic poem The Knight in the Panther's Skin designed by Georgian creatives has been released in Lithuania.

Noting that the 12th century poem by Shota Rustaveli is considered ‘one of the most significant works in the history of medieval literature’, Lithuanian Mint has created ‘an impressive series of coins’ named after the poem. 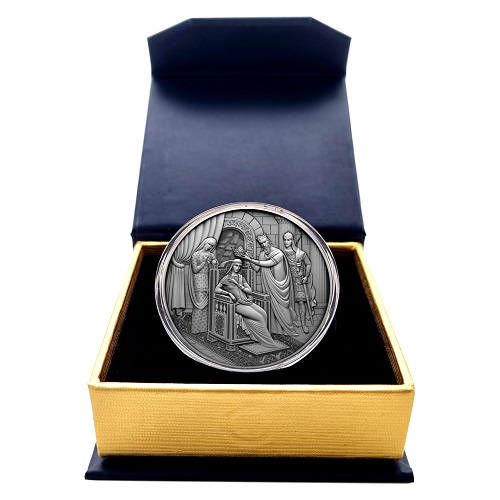 The first coin in the series reflects one of the poem’s ‘most magnificent episodes’ – the coronation of Tinatin, the king’s one and only daughter who is supposed to replace the father after the death.

One-dollar silver coins with 1,000 mintage cost 119 euro each. The coin is the outcome of a project led by Georgian graphic designer Iva Janezashvili, who works for the Lithuanian-based company. The illustration belongs to another Georgian individual Mamuka Mikeladze.

The minting process is highly precise and exact, thus, the work is particularly fascinating in its detailing – each element is like a separate piece, but together they combine to create a whole, conveying the unique traditional Kartvelian symbolism’, Lithuanian Mint notes.

The obverse of the coin features a portrait of Her Majesty Queen Elizabeth II surrounded by ‘mesmerising patterns that resemble openwork’.

The reverse of the coin, which depicts the coronation of Tinatin includes fine details and patterns ‘to convey the spirit of the times and the atmosphere of the work’.