Turkish contractor company Enka, who had intended to construct the Namakhvani hydro power plant on the Rioni river in western Georgia, has notified the government of Georgia that it is terminating the $800 million project in the country.

Georgian Economy Minister Natia Turnava said that over the next month the government will continue communication with the investor company ‘to find the right and most importantly, state-justified solution that will not harm our investment environment".

Chairman of the ruling Georgian Dream party Irakli Kobakhidze said that the termination of the contract ‘is a sad decision, a sad fact'.

This is a bad signal for further investments... everything will be done to ensure the energy independence of the country", said Kobakhidze.

Many activists and locals have been protesting the construction of the HPP in Georgia, claiming that the project was launched without sufficient research and thorough consideration of risks, including immediate security risks due to active seismic activity.

The protesters say that in addition to the environmental threat, the government has 'relinquished state interests' in the contract with Enka.

Following the series of protests that continued for more than 200 days this spring, Georgian authorities started negotiations with Enka in June to improve the terms of the contract, including on the unconditional transfer of land, water and other natural resources in the 99-year lease to Enka.

Georgian Prime Minister Irakli Garibashvili said that 'under the current conditions the Namakhvani HPP project will not continue'. 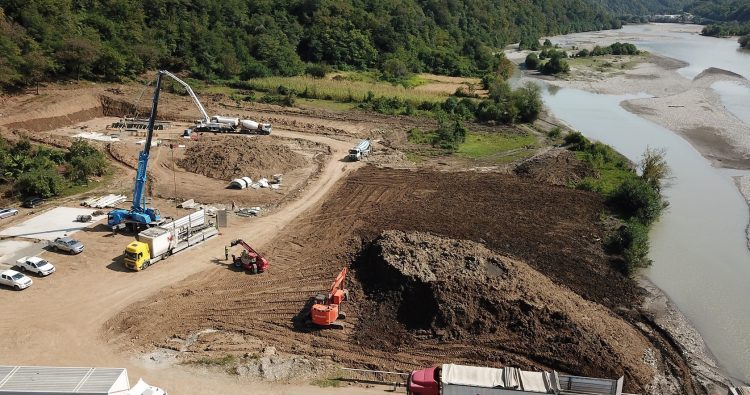 Turnava said in June that the Namakhvani HPP project, which is 'important for our country and strengthens the state in terms of energy', will be implemented only in an 'improved and safe way'.

Later in June civil society and the government held the first meeting of negotiations concerning the Namakhvani HPP project.

The meeting was mediated by the EU Energy Union Dispute Resolution and Negotiation Center.

The parties then agreed on a number of measures to be taken in three main domains:

Deputy Director Dirk Buschle of the EU Energy Union Dispute Resolution and Negotiation Center said that 'the most important and urgent of these actions is de-escalation on the spot at Rioni'.

Buschle stated that it was the government's responsibility to 'take the appropriate measures'.

The project promised to meet 20% of peak demand energy in the country, and increase annual domestic generation by 15%, significantly improving the energy independence of Georgia.

It would also have furthered Georgia’s commitments under the Paris Accord by reducing the CO2 emissions by approximately 750,000 tonnes per year, and would have made significant annual tax contributions to the Georgian budget.