The seven-episode production will be completed for airing this year, the GNFC said, after post-production work by sound designer Paata Godziashvili and producer Nana Zurabishvili on the series. Worked on between 1979-1987, the film had been left incomplete after the passing away of Chkhaidze, a celebrated film and TV director, in 1992.

Shvidkatsa follows its protagonist, a young filmmaker, on trips across the western Georgian province of Guria in preparation of his graduation work about polyphonic singing tradition from the region. The series introduces major personalities of the folk song scene from the province while also involving scenes from capital Tbilisi in the 1980s.

I could say this film has turned out to be a kind of scientific work on Gurian polyphonic singing, and we follow this Journey of Song [in the production]" - Nana Zurabishvili

Godziashvili and Zurabishvili have been involved in work on restoring the work-in-progress material of the production, editing the sound and correcting the colour, completing the editing process, producing titles and subtitles and more, the GNFC said. 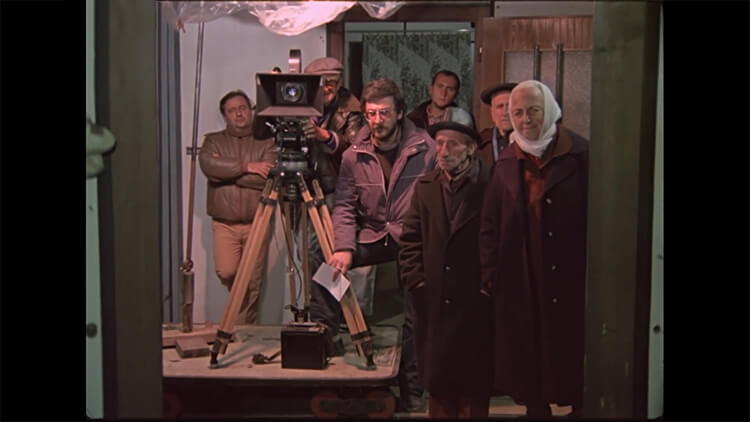 The film follows its protagonist, an aspiring filmmaker working on his graduation piece, on trips through the province of Guria for recording samples of folk polyphonic singing. Screenshot from Georgian National Film Centre video.

Zurabishvili was involved in the original production of the series starting in 1980 and was cast in the film. She told the film centre she saw it as her "mission" to take care of the completed part of the production and finish the series. The production material had faced the danger of becoming lost during the civil war and social upheaval in Georgia in the 1990s, Zurabishvili said in her comments about the restoration.

Chkhaidze, the director of the series, worked at the Soviet Georgian State Committee for TV and Radio Broadcasting before completing formal studies at the All-Union State Institute of Cinematography in Moscow.

Returning to Georgia in 1969, he worked in the TV films studio and produced films involving a mix of documentary and fiction, with a focus on folklore and cultural heritage. In 1970 Chkhaidze directed Old Georgian Hymns, a work exploring not only the singing tradition but also a look at historical monuments, painting and examples of porcelain enamel crafts.

Chkhaidze's work in cinema was recognised with prizes including three awards at Germany's 30th Mannheim International Film Festival for the 1978 Shepherds of Tusheti, a look at life in Georgia's highland province. The film also received a range of prizes at Soviet festivals in Georgia, Czech Republic and Russia.

Recipient of the Shota Rustaveli State Prize in 1979, Chkhaidze was also a laureate of the 1983 Albert Schweitzer Peace Medal.