With theatres across the world closed and stage art enthusiasts staying at home due to the coronavirus, the Tbilisi Youth Theatre has made a move to celebrate World Children's Theatre Day by bringing its productions to viewers in digital form.

The company, formally known as the Tbilisi Nodar Dumbadze Professional State Youth Theatre and boasting a rich history of over 90 years, decided it was not going to forego the international date because of the gloomy mood of the pandemic.

Dimitri Khvtisiashvili, the troupe's artistic director, revealed in a social media address on Friday the theatre would upload a number of its popular shows to its YouTube channel as a way of cheering up fans of the art form over the coming days.

Later on Friday the company posted recordings of two of its productions - A Flea and an Ant, a popular tale based on a piece of Georgian folklore and Shakespeare classic Romeo and Juliet - on the channel. 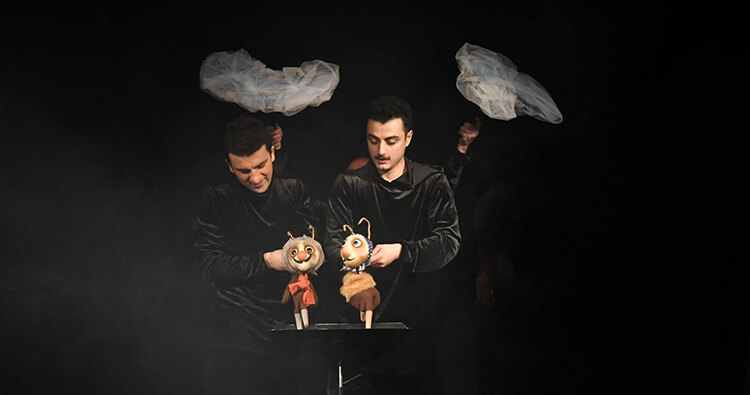 Actors of the troupe in a performance of 'A Flea and an Ant'. Photo via Tbilisi Youth Theatre.

The former is co-directed by the artistic director and Gia Marghania, with the latter - uploaded in two parts - a result of stage work by celebrated Georgian director Levan Tsuladze.

In his video message announcing the digital form of shows Khvtisiashvili called the Romeo and Juliet staging "one of the best" productions of the troupe over the last few years.

Recordings of other works are expected to follow over the coming days along with a programme announcing the releases on the theatre's social media every evening.

Marked on March 20, World Day of Theatre for Children and Young People celebrates stage art for younger generations, with venues holding shows, hosting rehearsals and holding public talks on the subject to popularise the art form.