Kutelia took several top posts under the United National Movement leadership and now he tries to display himself as an independent and impartial member of the civil sector,” Mdinaradze said.

The contract information was released by the US Department of Justice [per the Foreign Agents Registration Act] as any US lobbyist firms are obliged to provide information on their overseas relationships.

Kutelia, who served as Georgia’s ambassador to the US and took several top posts under the UNM government, now chairs the organization Atlantic Council.

He dismissed any contacts with the US lobbyist firm on behalf of the United National Movement and released a letter by the president of Orion Strategies Randy Scheunemann shortly after the accusations were voiced.

In the letter Scheunemann says that Kutelia ‘was erroneously listed’ as a point of contact in an Orion Strategies filing with the US Department of Justice Foreign Agents Registration Act Unit.

That erroneous statement has been corrected and an amendment has been filed with FARA. Orion Strategies regrets the error.”

The letter reads that Kutelia has been retained by Orion Strategies to provide research and insight into security, economic, military and policy developments in Georgia. 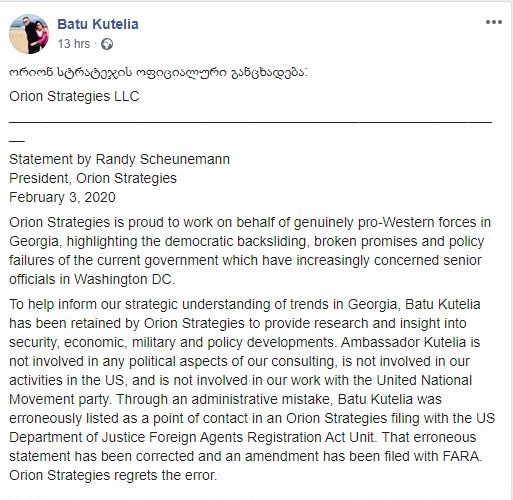 Kutelia also confirmed that he dealt with Orion Strategies as the head of the NGO to provide specific analyses.

UNM members said that the UNM signator on the document was the party’s Executive Secretary Koba Nakopia. However, the document released by the US Department of Justice did not provide the information.

Kutelia was Deputy Head of Georgia’s National Security Council between 2011 and 2013. In 2008-2011 he was Georgia’s ambassador to the US, Canada and Mexico. Between 2007 and 2008 Kutelia served as deputy defence minister of Georgia.