A counter-terrorist assault operation, and a medical evacuation drill have been among missions involving the Georgian Defence Force troops alongside their allies in the ongoing 2020 edition of Noble Partner multinational manoeuvres outside Tbilisi.

The Ministry of Defence of Georgia on Monday shared details of some of the operations that featured ground troops, armoured vehicles and air assets in the exercise. One of these involved special operations forces from the GDF and their Polish counterparts in a counter-terrorist drill at the Vaziani Training Area.

In the simulated scenario, the troops used their vehicles - Georgian-produced armoured cars and American-made Oshkosh vehicles in Polish service - to assault a built-up complex following an assault by United States forces' Apache attack helicopters on the defences.

Covered in their approach by the same air assets as well as snipers, the special operations units captured the central building of the notional terrorist enemy before having one of their service members counted as injured, to trigger a requirement of providing medical evacuation, or a medevac.

This phase of the operation was carried out with the involvement of a Black Hawk transport helicopter of the US forces, after the "injured" servicemember received first aid on the spot, the MoD release said. 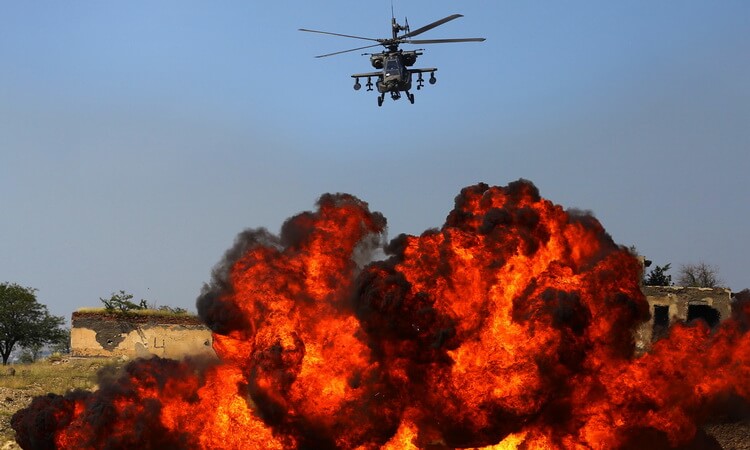 An Apache attack helicopter of the US forces supported ground troops throughout their manoeuvres. Photo from Ministry of Defence of Georgia.

In a separate operation, medical units from the 4th Mechanised Brigade of the GDF and the United States National Guard of the State of Georgia got involved in drills on two separate polygons at Vaziani, with support from air assets.

The forces were tasked with reacting to a scenario where an engineering convoy had suffered injuries to two of their personnel in a notional explosion and required first aid as well as medevac. The servicemembers in question received both the treatment and the evacuation before medics in emergency facilities "stabilised" their condition.

The 2020 edition of Noble Partner has been ongoing since the start of last week and involved over 2,700 troops from the GDF, the United States, France, United Kingdom and Poland.