Georgian PM on Congressmen’s letter: US political spectrum is diverse, reality is that US-Georgia relations are at an all-time high

Georgian Prime Minister Giorgi Gakharia has responded to a recent letter sent by six American Congressmen to US State Secretary Mike Pomapeo in which they express concern ‘with the recent decline in democratic governance and potential corruption in Georgia.’

In the letter the Congressmen Jodey Arrington, Bill Flores, Will Hurd, Brian Babin, Randy Weber and Markwayne Mullin said that the ‘current government of Georgia led by the Georgian Dream party is being manipulated by Russian oligarch, Bidzina Ivanishvili, who is making efforts to drive out U.S. businesses that have been contributing to the American and Georgian economy for decades’.

Georgian Prime Minister Giorgi Gakharia has responded that ‘some Congressmen will praise us, some will criticise us. However, the objective reality is that the US-Georgia strategic partnership faces no threats, as well as American businesses in Georgia. US-Georgia relations are at an all-time high.'

Gakharia stated that the American political spectrum is very diverse. However, statements being made by top US state officials point at  ‘close strategic partnership and wish to further strengthen relations in many directions, including for business and investments.’

Yesterday I received a letter from American Congressman Joe Wilson, an excellent letter which praised Georgia’s democratic progress. I have had a very positive and future-oriented phone conversation with US State Secretary Mike Pompeo. The conversation underlined how valuable the strategic partnership is for both sides. It is the objective reality,” Gakharia said.

He stated that some people and political forces are trying to offer ‘a biased reality, to help their own narrow, political interests.’

Through presenting a biased reality the parties are damaging the state interests, not a separate political force. It is in the interests of the country, not the ruling party’s interests alone, to have a close strategic partnership with the US. It is in the country’s interests as our territories are occupied and without the support of our allies we will not be unable to settle the issue peacefully,” Gakharia said.

Speaking about the US company Frontera , Gakharia said that Georgia won a case against the company in International Arbitration Tribunal as the company violated terms of the contract.

When some people, including Americans, fail to meet their obligations and Georgia wins the case in International Arbitration Tribunal, we should be happy about the country's victory," Gakharia said. 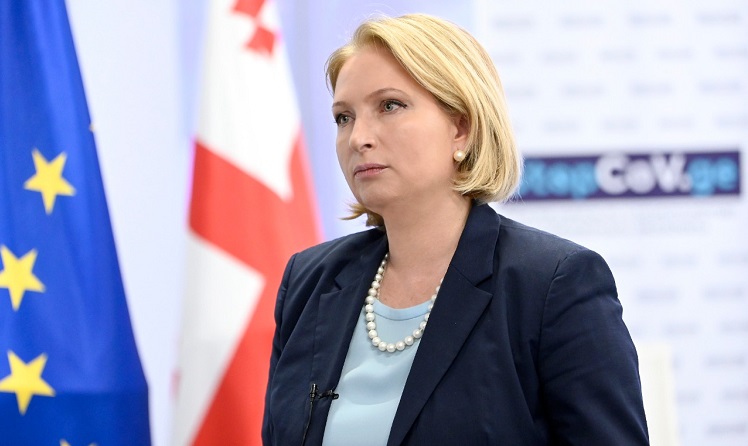 Economy Minister Natia Turnava said that the Congressmen are likely to find themselves in an awkward situation. Photo: Economy Ministry press office.

Georgian Economy Minister Natia Turnava said that ‘any attempts to harm US-Georgia relations will be useless,’ and that the ‘Congressmen will find themselves in an awkward situation as they have biased information’ on the American company Frontera.

In April 2020, the government of Georgia announced that the International Arbitration Tribunal had upheld the vast majority of claims filed by the Georgian government against the US oil and gas firm Frontera Resources.

Georgia had accused the company of violating the terms of their contract signed in 1997, claiming Frontera has refused to return to the state land they are no longer using for exploration.

Last week the Georgian government decided not to terminate its contract with Frontera Resources Georgia Corporation despite winning the case and to allow the company to continue operating in part of the original contract area.

Speaking about the reasons Turnava said  that relations with the United States, 'which is the main strategic partner of our country, is a fundamental issue for us'.