Ongoing work on a highway of "crucial" importance, set to connect Georgia's capital Tbilisi with the Black Sea city of Batumi, will be completed soon, prime minister Giorgi Gakharia told reporters on Saturday.

Gakharia made comments about different sections of the ongoing highway construction at an opening of a 14-kilometre-long segment connecting the village of Japana with the city of Lanchkhuti in the Guria province of western Georgia.

This [section] will be a very significant part of the east-west highway [...] the first section of which will be opened next year, before the opening of the season.

Once the Kutaisi bypass road is completed, the entire highway to Lanchkhuti will be launched. This is a crucial project for realising the transit function of the country," Gakharia told local media. 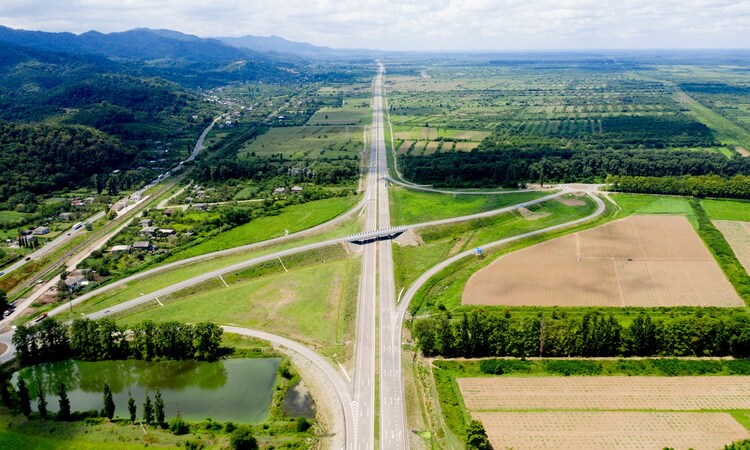 An aerial view of a part of the newly opened section connecting the village of Japana to the city of Lanchkhuti in Georgia's west. Photo via Ministry of Regional Development and Infrastructure of Georgia press office.

About 70 new kilometres of the highway are set to complete this year, with subsequent work to focus on the Rikoti Pass section, PM also said in his comments.

The newly completed 14-kilometre-long section of the E60 "east-west" highway is already serving drivers and shortens travel time by 20-30 percent, the Ministry of Regional Development and Infrastructure said in its release.

The four-lane road of the section cost 250 million GEL ($81,7 mil/€71,4 mil) to complete and involved support by the European Investment Bank.

The road connects the city of Lanchkhuti along with the villages of Japana, Kviani, Nigoiti and Kvemo Shukhuti in the western province.