PM Bakhtadze responded to a number of questions from legislators of the Parliamentary Assembly of the Council of Europe on his country's domestic and foreign policy yesterday.

“We are trying to make Georgia a regional hub for international business, tourism, logistics and education,” Georgian Prime Minister Mamuka Bakhtadze said at the Q&A session.

As to whether Georgia will become “a fully democratic” state, PM Baktadze said that with last year’s presidential elections, which was a “historical milestone” for the Georgian people, the country has moved to a "parliamentary democracy".

PM Bakhtadze also said that “the role of parliament has never been so strong in Georgia” while the relations and communication between the legislative and executive branches “has never been so intense”.

Our political team believes that parliamentary democracy is the best model for Georgia to create a strong and European state”, Bakhtadze said.

He also noted that when it comes to democracy and human rights protection the best indicator would be the court in Strasbourg, where he said the cases have decreased by 80 percent. 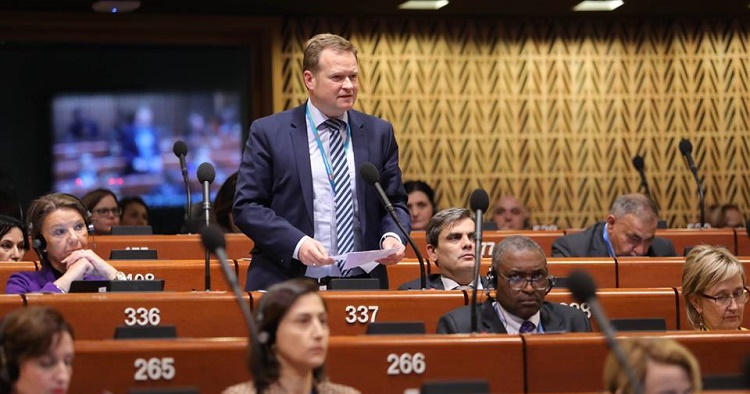 MPs from the Council of Europe member states asked a number of questions to Mamuka Bakhtadze on issues concerning Georgia's domestic and foreign policy. Photo: Government of Georgia/Facebook page

The Prime Minister underscored his country’s economic development as well. He said Georgia is number five in the open budget index "which measures a very important policy on the level of the government".

This is one of the major indicators of the success of Georgia,” Prime Minister Baktadze said, adding that Georgia is number six in the world in the doing business index conducted by the World Bank.

PM Bakhtadze also noted he is aware of the shortcomings and spares no efforts to address them with his team. He also added that the Georgian parliament is “working very intensively” on the recommendations given by various international organisations.

Please, be sure that Georgia will take the success story to another level with your support and with your recommendations,” he said.

PM Bakhtadze also responded to a question on annulling the debts of 600,000 blacklisted citizens. He said “the idea to write off these debts” belonged to him personally when he was still the Minister of Finance long before the presidential elections.

He said these people “did not have any chance to participate in the economic life of Georgia” as they were blacklisted.

He further underscored that the overall situation badly affected the national economy, while in recent ratings released after his initiative was carried out "the country has been upgraded by major international credit agencies".

One of the main arguments why they did so was that we could implement this project,” he said, denying the claims of “vote-buying” for the presidential elections.

The Georgian Prime Minister also responded to a question concerning Azerbaijani journalist Afgan Mukhtarli who vanished from Tbilisi on May 29, 2017 and resurfaced in custody in Baku a day later.

Bakhtadze said this case is “very sensitive”, the Georgian officials are in communication with their Azerbaijani colleagues, the investigation is in progress and he will share his personal evaluation when the process comes to an end.

The video of the full Q&A session is available here.