De facto authorities of Georgia’s Russian-occupied Tskhinvali region say that the tension at the villages of Chorchana and Tsnelisi will be eased only if and after Tbilisi removes a police post in Chocrhana, located on the territory which is under the control of the central Georgian government.

De facto officials of Tskhinvali made the statement during today’s 6th special meeting of the Incident Prevention and Response Mechanism (IPRM) in Ergneti.

Tskhinvali refused to open a so-called checkpoint to Akhalgori District [under the Russian control] until the ‘tension is eased’, which has been closed for more than 45 days, creating serious humanitarian problems for locals.

Tbilisi says that it is its “principle position” that an ordinary police post, on the Tbilisi-controlled territory, will not be removed.

Deputy Head of the Analytical Department of the Georgian State Security Service Irakli Antadze actually confirmed that after the opening of the police post in Chorchana [by Tbilisi] the occupying forces grabbed additional 1,300 meters of the Tbilisi-controlled territory in the same village and opened two new “police-posts” there. 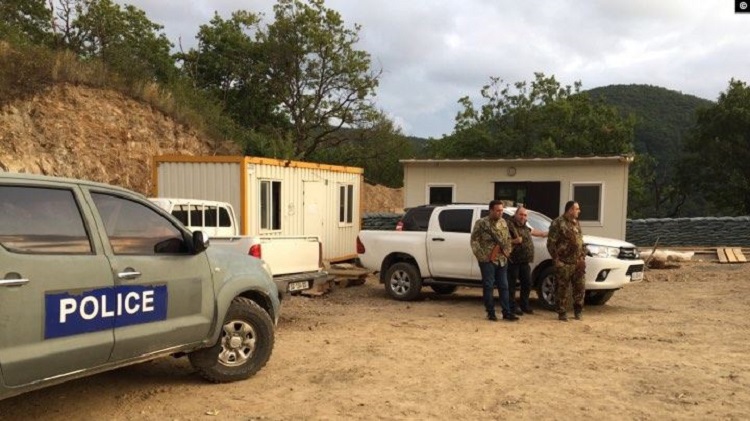 De facto Tskhinvali government says that the Georgian police post is "only 250 meters far from the nearest Ossetian settlement, and it carries security threats to the locals." Photo: RFE/RL.

Tension remains on the ground. Talks will continue,” said Antadze, without naming the date of the following meeting.

Antadze said that Tbilisi “strongly condemned” the detention of monitors of the European Union Monitoring mission yesterday by the occupying forces, stating that “we are waiting for the proper assessment of the issue by our international partners.”

Tension on the ground started at the end of August when Tbilisi opened a police post in the village of Chorchana.

Tskhinvali demanded the removal of the post shortly, saying at the time it “posed threats to our security.”

Tbilisi refused to do so and the occupying forces opened two new “police posts” at the village of Chorchana, on Tbilisi-administered territory and also closed so-called checkpoints.