Georgia’s capital Tbilisi is hosting a conference involving some of the world’s leading scientists for combating pests, with professionals from various fields discussing the country’s major results in dealing with a stink bug invasion over the last three years.

Reviewing the local experience and methods in pushing back the damage caused by the pest that decimated hazelnut production in 2016 and 2017, entomologists from Europe, the United States and Australia are joining their Georgian counterparts in the conference.

The principal aim of the event is to review and share the  “unique, integrated system” developed by the country for countering the threat that could become a pathfinding experience for the threat worldwide, the Ministry of Environmental Protection and Agriculture of Georgia said.

Beside the scientists, farmers and business professionals are also involved in discussing the results of the programme that has involved joint work from the United States Agency for International Development (USAID) and the  National Food Agency of Georgia. 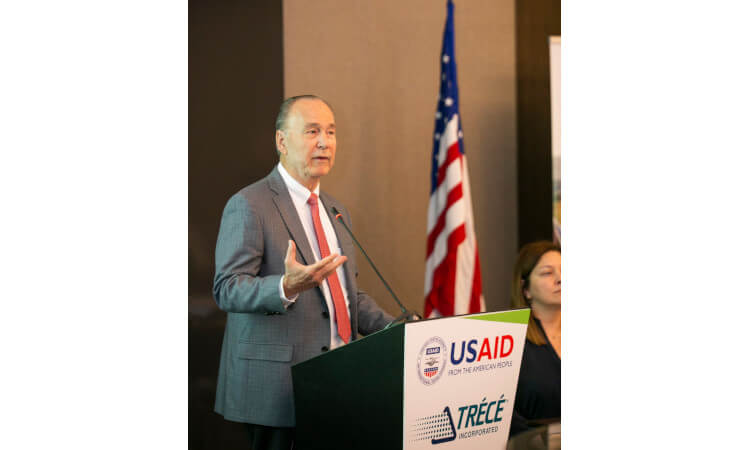 Bill Lingren,  Trece Incorporated CEO and head of the international scientific delegation to Georgia, speaks at the conference. Photo: Ministry of Environmental Protection and Agriculture of Georgia press office.

The Georgian government,  the Ministry of Environmental Protection and Agriculture and the population have together managed to deal in a short period of time with an issue that took much more developed countries decades to solve,” Giorgi Khanishvili, First Deputy Minister of Environmental Protection and Agriculture told conference participants in his opening address.

Khanishvili’s comments were echoed by Bill Lingren, head of the international mission of entomologists to Georgia and CEO of the Oklahoma-based Trece company, who called the results of the US-Georgian programme “incredible” and said the local experience would be “exemplary” on an international level.

Those taking part in the conference also inspected hazelnut farms and met farmers in Guria and Samegrelo provinces in Georgia’s west to see the recovered production and increased prices on produce this year.

Lingren has been involved with his Georgian colleagues in efforts to combat the stink bug infestation over the last year:

Among goals discussed at the ongoing conference is an objective of creating an information database for sharing the solutions developed in joint work by the USAID and the National Food Agency, as part of an Integrated Pest Management programme for dealing with stink bug invasions.

The international delegation of scientists will be in Tbilisi for the conference through August 30.

Last year the USAID offered $3.5 million to Georgia to help the country combat the stink bug infestation problem. USAID gifted over 17 tractors to the National Food Agency in Samegrelo for the same goal.

The brown marmorated stink bug, which damages crops, was first reported in Georgia in 2015. In 2016, the bugs destroyed a significant portion of the hazelnut harvest in the country’s west. 2017 was even more devastating and struck a wider area.