Both Khalvashi and the founders say that the channel was illegally seized from them at different times under the United National Movement leadership.

Khalvashi states that the illegal seizure took place in 2006, while Dvali and Akimidze say that they were illegally deprived of 60 per cent of their shares in 2004, the year Khalvashi became the owner of 100 per cent of shares of Rustavi 2.

Khalvashi told the media that Dvali and Akimidze did not accept the offer, adding that they are “very constructive in talks” and negotiations will continue.

He said that things changed after 2015, when he vowed to return 50 per cent of Rustavi 2 shares to Akimidze and Dvali and appoint Dvali the director general of Rustavi 2 after coming back into possession of the shares.

Now Khalvashi says that his lawyer Paata Salia will continue to be the director general of Rustavi 2. 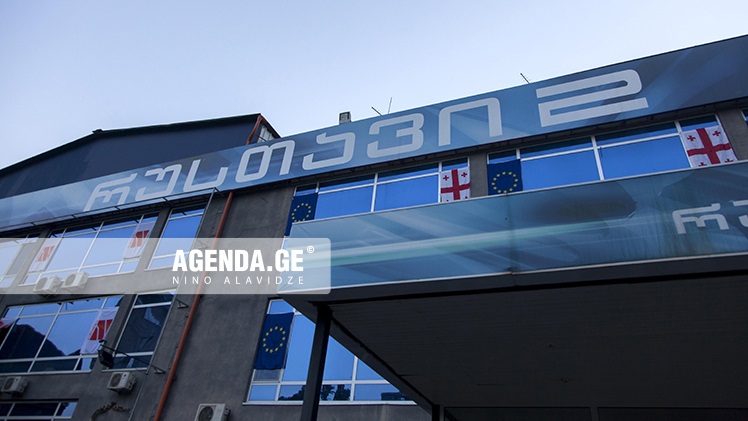 Rustavi 2 has changed owners more than 20 times since its opening in 1994. Photo: Nino Alavidze/Agenda.ge.

Dvali and Akimidze say that they will officially answer to Khalvashi’s offer and speak about the reasons of their response in several days.

A couple of days ago they stated that 40 per cent of shares would not have been acceptable to them as the shares will not be sufficient “to preserve the editorial policy of Rustavi 2 as it is now.”

Thanks to the Georgian Dream government, who has not investigated the illegal seizure of Rustavi in 2004 so far, we are now completely dependent on the goodwill of Khalvashi,” Dvali said.

The European Court of Human Rights allowed the return of 100 per cent of shares of Rustavi 2 to Khalvashi on July 18, 2019 after he won the case in all three courts of Georgia back in 2017.

The same day he registered the channel on his name and appointed Salia a new director general of the channel, saying that the TV will have a new media manager, a foreigner with high reputation and qualification.

We have already taken actions to find the media manager,” Khalvashi told the media today.

After winning the case in the European court former Defence Minister of Georgia Irakli Okruashvili filed a lawsuit against Khalvashi, saying that he bought the channel with seven million USD in 2004 and that Khalvashi, once his closest ally, was a nominal figure, just representing him in the purchase agreement.

Okruashvili says that he has a document, “signed by Khalvashi in 2010,” that he [Okruashvili] is the real owner of the channel, which Khalvashi says is fake