Three rallies are scheduled to take place in Tbilisi today.

One of them, held in support of individuals detained during the June 20 protests in Tbilisi, has already begun.

The rally, which started at 11 a.m., calls upon the public to join them to “make the court” deliver fair verdicts for those detained during the June 20 rally in central Tbilisi, which was sparked by the presence of Russian MPs in the country and in the Georgian parliament.

305 demonstrators were detained in the center of Tbilisi on June 20. Trials held at Tbilisi City Court on June 21 failed to meet the standards of a fair court and several of the detainees were sent to detention [for petty hooliganism and disobedience to police] sometimes based on the testimony of a single law enforcer,” a statement released by the group organising the rally said. 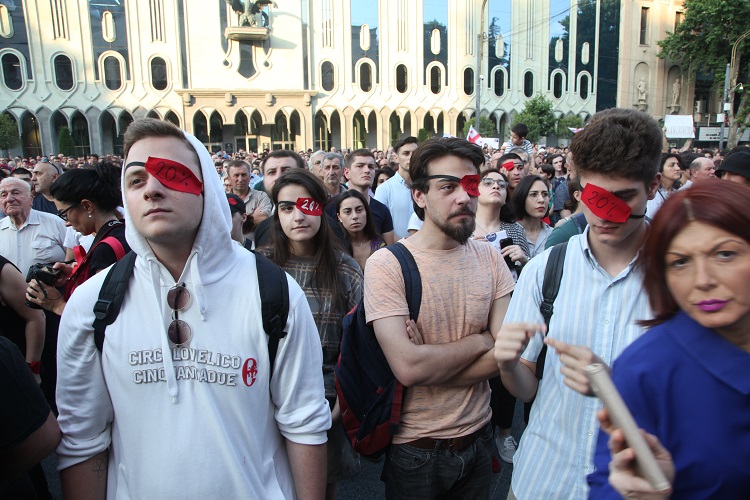 Many of the demonstrators have one of their eyes covered as several youngsters were injured to the eyes and lost eyesight during the June 20 rally protesting upon the presence of MPs in the country from Russia  which occupies 20 per cent of the Georgian land. Photo: Nino Alavidze/Agenda.ge.

The organisers say that public protest to the events and demands to release the detainees “changed the situation” and the court started releasing the detainees.

Tbilisi Court of Appeals starts discussing the cases of the detainees today and public solidarity for the detainees is very important,” reads the statement.

Five individuals detained during the rally were declared guilty yesterday. However, four of them were released from the court as they have already spent three days in prison.

The fifth will leave prison when his five-day-term expires.

The Georgian Interior Ministry says that of the 305 detained, 121 were sentranced to several-day administrative imprisonment, while others have been released.

The second rally with the use of cars is scheduled for 2 p.m. today, when demonstrators in their cars will go to the Interior Ministry building, demanding the resignation of Interior Minister Giorgi Gakharia.

The main rally on the Rustaveli Avenue will resume at 7 p.m, with its demands unchanged.