He stated that viewing Gavrilov at the high tribune of the Georgian parliament was “alarming” and “not agreed upon” which caused protest amongst the Georgian population.

Gavrilov under umbrellas, bodyguards are trying to help him reach a car safely. Photo: 1TV.

Holding the assembly as it was held was unacceptable and the organisers will have to provide detailed explanations as to why it has happened,” Kaladze said, adding that the assembly will not continue in the way it started.

Kaladze stated that Georgia has been a member of the assembly, a transnational organisation defending the rights of Orthodox nations, for 26 years. 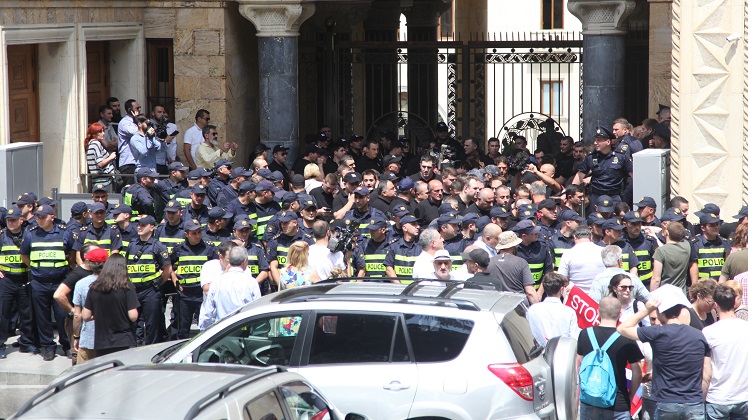 However, it was unacceptable and incorrect to hold the forum in the Georgian parliament in the form it was held, moderated by a member of the Russian delegation,” Kaladze said.

He stated that today’s incident affected the ruling party.

After an appeal of the opposition, people gathered on the central streets of Tbilisi to protest the presence of Russian MPs in Georgia.

The protesters blocked both entries of the Radisson Blu Iveria Hotel, where Gavrilov stayed, and threw bottles and other items at him when he was leaving the place.

Gavrilov has already commented on today’s incident with the Russian media, saying that he was attacked “by radical groups” in the Georgian parliament.

Russian MP Alexey Chepa, who was also in parliament and said that Russia is not an occupant and one day Georgia will be a member of a ‘restored Soviet Union.’