PM Bakhtadze in US: Georgia is becoming economic hub in region

“Our strategy is to make Georgia a regional hub for tourism, for international business, logistics, education and innovations”, Prime Minister Mamuka Bakhtadze told the audience at the World Affairs Council in Seattle on June 7.

He said during the 28 years since Georgia gained independence from the Soviet Union, the country tried to tread its own democratic course as an independent nation.

28 years ago, we started our path toward building institutions of democracy, creating a justice system that works as a representative accountable democracy. These reforms have also made Georgia one of the easiest places to do business, to invest in our country, our people, and our infrastructure. Step by step, we are becoming an economic hub for the region", he said. 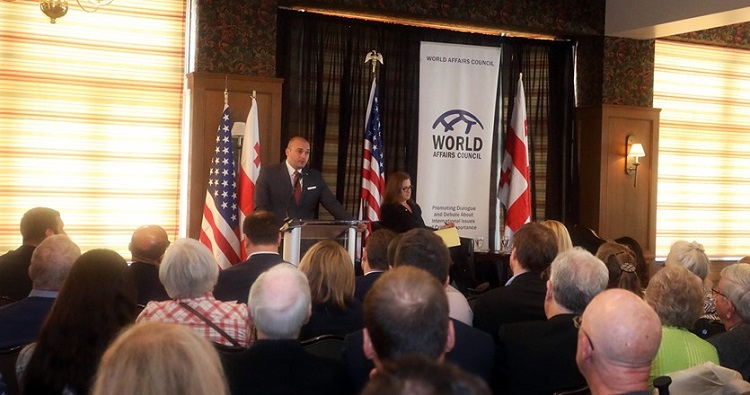 In discussing Georgia's success, PM Bakhtadze emphasised that Georgia is the role model for many countries in terms of democratic consolidation and economic transformation. He said the Georgian Government's vision for the future is grounded in the ambition of turning Georgia into a world-class country to live, work and grow.

The World Bank Group ranks us as number six in terms of doing business in the world. The Fraser Institute ranks us as number seven right after the US for economic freedom and in the reflection of our commitment to open government the Open Budget Index ranks us number five in access to government information”, PM Bakhtadze said.

In his speech, Mamuka Bakhtadze urged American entrepreneurs to take advantage of the opportunities offered by Georgia, stressing that Georgia is the most open economy in the world, as evidenced by the World Bank, the International Monetary Fund and large investors.

Had a very interesting discussion at @TheRainierClub hosted by @wacseattle. Talked about ????????’s vision on how to become center of gravity for the region’s economic transformation as well as importance of ???????????????? strategic partnership on our path towards more development & inclusivity.

He said Georgia is ranked 3rd in terms of low tax regime, while the country maintains a healthy balance between investments in infrastructure and human capital and keeping low taxes.

We welcome, invite, and encourage enterprising Americans to seize these opportunities that are in Georgia. Thanks to our location, our immediate regional market offers access to half a billion people. We offer a truly unique and vital geographic location for American business to reach European and Asian markets", he said.

Georgia offers an untapped region of an estimated 2.3B million people to U.S. business as a strong, democratic ally of the United States. #GoodforBusiness pic.twitter.com/9oCvRH7ip3

Speaking also on Russia’s occupation of Georgian regions of Abkhazia and Tskhinvali (South Ossetia), PM Bakhtadze said the country will return its regions but not through the use of force, but rather through the use of democracy, diplomacy, opportunity, development and humanity.

He also reiterated Georgia's aspirations to join the European Union and NATO, as well as its desire to sign free trade agreements with the US and France.

PM Bakhtadze arrived in US on June 5. He is scheduled to complete his trip next Friday.