European experts have published a report for rehabilitating David Gareji, one of the principal monuments of cultural heritage in Georgia, after it was named among Europe’s seven most endangered sites last year.

The report, presented by the Europa Nostra cultural heritage organisation, involves an assessment of the technical state of the monument and measures to be taken for its safeguarding from factors ranging from natural conditions to vandalism.

The release is a result of studies conducted by a Europa Nostra mission that worked closely with Georgian authorities and professionals during a visit to David Gareji in November and included experts of cultural heritage and financial support to rehabilitation projects.

Degradation of the physical structure and the artworks at the monument, along with vandalism and graffiti, was named as the main threat to the 22 rock-hewn monasteries and over 5,000 sanctuaries and cave-cells that comprise David Gareji, located on Georgia’s south-eastern border with Azerbaijan and partly extending over it.

Due to the seismic risk, water percolation, the soft and porous nature of the limestone rocks in which the monasteries were hewn, the structure is liable to crumble when exposed to cycles of heat and cold,” the report said when describing the physical effect on the monument.

The experts also noted unlawful practices, including taking souvenirs from the 6th century CE site and leaving graffiti on its surfaces, as contributing factors to its degradation.

Recommendations outlined by the team of professionals said the number of distinctive sites at the monument — and limited resources available to rehabilitate them — meant prioritisation of the most at-risk cave sites would be necessary.

Structural stability of “each cave site, or lavra” will require assessment through “geo-structural analysis”, while safe access to selected sites will be needed to set up security systems both for monitoring their geographical stability and safeguarding them from vandalism-motivated intrusions. 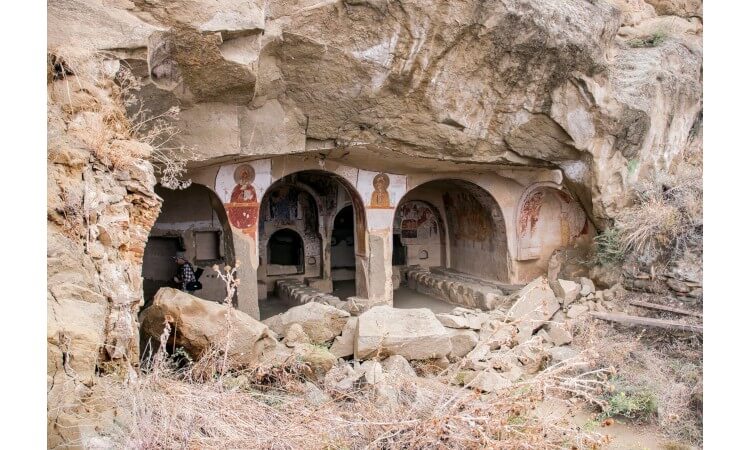 The report also includes a need for a “command structure” and a “steering committee” for overseeing the above-mentioned measures for safeguarding David Gareji.

Finally, the experts recommend setting up a visitor centre and a museum near the site to service the “increasing flows” of visitors and present exhibits discovered at the monument — instead of having them preserved at Tbilisi museum venues 70km away, as is currently the case.

The full technical and financial report for rehabilitating David Gareji can be accessed here.

Known formally as the David Gareji Monasteries and Hermitages, the site was named in Europa Nostra’s 7 Most Endangered programme last year, with the selection highlighting the seven monuments across Europe that face risks of disintegration or decay.

The Georgian site was nominated for the list by the Georgian Arts and Culture Centre, which represents the country in Europa Nostra.