Georgia is launching the first stage of a green policy aiming to introduce eco-friendly transport in the country.

Here are the key directions of the project that the Prime Minister of Georgia Mamuka Bakhtadze and Tbilisi Mayor Kakha Kaladze presented today.

The government will continue to encourage people to buy and use electric vehicles. Bakhtadze announced that 90% of Georgia’s current vehicle fleet will be replaced by electric cars within the next 10 years.

Georgia will be the first country to replace its vehicle fleet with electric cars in such a short period of time. This is a very ambitious plan, but this plan will bring great benefit to Georgia”, Bakhtadze said.

The import of electric cars will start next year and over the next one year over 2,000 electric vehicles will be imported to Georgia through the so-called car-sharing system. This will ease traffic in our capital city and will make electric cars more popular on the local market.

To further support the increase demand on electric cars and also encourage the import and realisation of electric cars on the Georgian market, the government plans to launch different initiatives. One of these initiatives includes launching a plant for the production of electric vehicles. Bakhtadze said that the government is already negotiating with two large car makers to build a plant in Georgia.

Bakhtadze also said that the government intends to encourage the launch of new leasing schemes in the country.

We will provide encouragement for launching new leasing schemes in Georgia, according to which a consumer will buy an electric car and pay off it within 5 years with the savings made on the cost of fuel”, Bakhtadze said.

The Georgian government and Tbilisi City Hall are also involved in the development of an above-ground metro system. At the first stage, the ground-based metro will connect the Samgori metro station with the Lilo Market and Tbilisi Airport. Construction work will begin at the end of 2019. The modernisation of the Samgori metro station will be carried out and it will be connected with the new metro line as well. 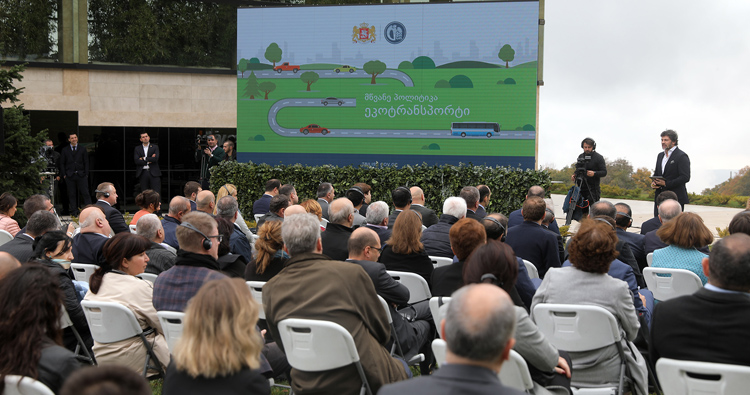 Between 2021-2022, seven new metro stations and a fully renovated Samgori metro station will be gradually put into operation.

About eight new stations will be built within this project and we will start implementing these projects by the end of 2019. $90 million will be spent on it, of which about $30 million is the cost of the train wagons and the rest of the money will be spent on arranging the infrastructure. The new stations of Tbilisi Metro will be able to serve 200,000 passengers,” said Kaladze.

This project will be implemented by using the existing infrastructure of Tbilisi Bypass Railway -  a project that aimed at building a railway around the city, the construction for which began in 2010 but was suspended due to “serious engineering defects”, Bakhtadze said.

We will use the infrastructure of the bypass railway to build a new metro station from Samgori to Lilo. At the same time, the Tbilisi agglomeration is being developed and this new line will help us to extend towards the direction of Rustavi. This is a historic project”, Bakhtadze said.

At the second stage of development, the metro is planned to be connected to Rustavi through an above ground metro.

On the other hand, Kaladze added that Tbilisi City Hall had already started taking steps towards developing transport policy in Tbilisi and summed up what had recently been done in this direction.

He said that so far about 20,000 taxi drivers were registered in Tbilisi and it is already decided the official colour of taxis in the city will be white. Also, from 2019, the first stage of regulations will come into play which will impose certain restrictions for right hand drive vehicles, two-door vehicles and different coloured vehicles.

We are using the best practice of European countries. As far as you know, we have suspended a contract with CityPark, which violated the contract. Currently, Tbilisi Transport Company carries out parking management throughout the capital. From next year, we are launching a zonal parking system. There will be different parking tariffs in different districts of Tbilisi”, Kaladze said.

As announced today, the Tbilisi public bus fleet will be completely renewed, meaning that all existing yellow buses will be replaced with new ones, which will be absolutely environment friendly. Kaladze said that about 550 new buses will be introduced by the end of 2019.

Kaladze also said that it is planned to create branded buses for Tbilisi. Also he said that from 2020 Tbilisi will have some 200 electric buses, and that by 2020 the number of public buses would be increased to 900 units.