Sophia the Robot, Hanson Robotics’ most advanced human-like robot, who is taking part in the fifth Open Government Partnership (OGP) Global Summit in Tbilisi, said during a briefing today that she loved being in Georgia as Georgians are friendly and hospitable.

She also said that Georgia is famous for its delicious food, which she could not taste as she is a robot.

Sophia dismissed fears that robots may replace people and said that robots are created to help humans in their everyday activities, particularly those with certain impairments.

Tomorrow, I’ll be in #Georgia for the @opengovpart Global Summit as part of my role as @UNDPAsiaPac Innovation Champion! It is a meeting for those who want to make the world a better place where governments are open, transparent, and working for the people #OGPGeorgia#SophiaUNIC

Sophia is the Innovation Champion of the United Nations Development Programme (UNDP) and during the OGP summit she is scheduled to speak about the role of artificial Intelligence in opening public services to people, making them more easily accessible for everyone, including the vulnerable and disadvantaged. 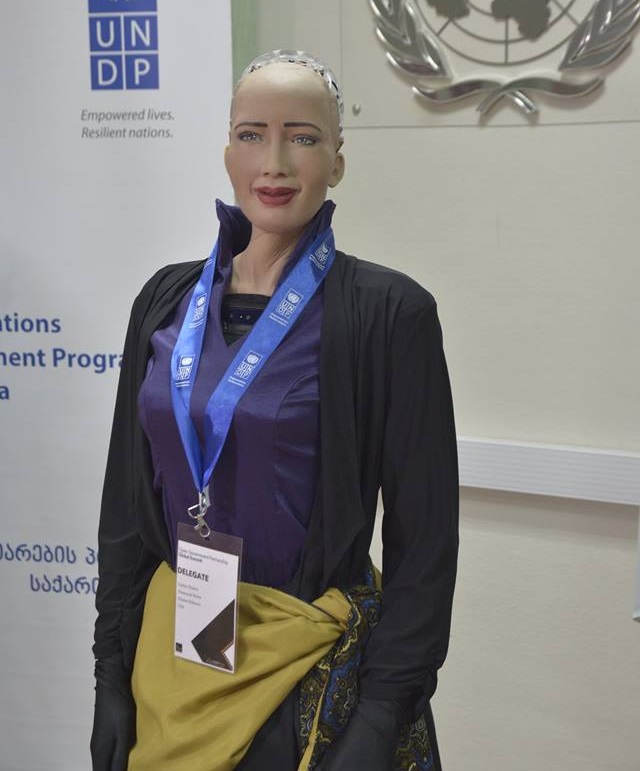 Sophia was created by American roboticist David Hanson, the founder of Hanson Robotics.

Sophia was activated in 2015 and was granted citizenship in Saudi Arabia in 2017. Through artificial intelligence, she is able to imitate human gestures and to converse on predefined topics.