The Men Care initiative aiming  to raise awareness about the importance of fatherhood and male involvement in family life has become a winner in the nomination of the Equality-Friendly Initiative of the year at the Emerging Europe Awards ceremony in London. 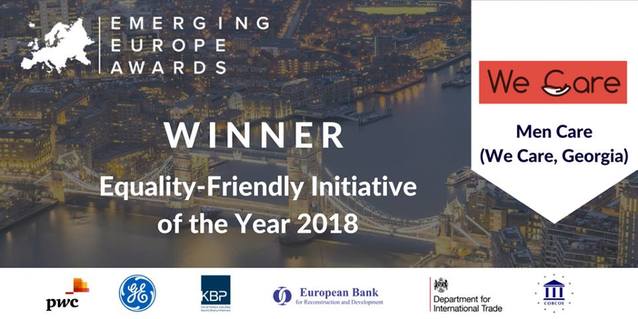 The Men Care initiative from Georgia has been selected by the jury between ten nominees for the Equality-Friendly Initiative of the year.

MenCare Campaign in Georgia has been implemented since 2016 by the UNFPA Georgia Country Office in partnership with the NGO We Care within the framework of the UN Joint Programme for Gender Equality funded by the Government of Sweden.

The campaign seeks to break the stereotype that family, its health and well being is a woman's responsibility.

Emerging Europe is a London-based think tank committed to boosting the social and economic development of twenty-three countries in Eastern Europe and raising awareness about the region.