The investigation of the high profile murder case of two teenagers will be carried out by the Ministry of Internal affairs as the court verdict failed to identify the actual killer of 16-year-old David Saralidze, who died from multiple knife wounds.

The court verdict was followed by a protest rally of hundreds of people in front of the Tbilisi parliament building supporting the father of the murdered teenager, Zaza Saralidze who demanded the government hold accountable the actual killers.

The father’s protest resulted in the resignation of the Georgian Chief Prosecutor Irakli Shotadze on May 31 however the protest rally still continued and participants demanded the government and PM Giorgi Kvirikashvili resign.

PM Kvirikashvili tried to speak with demonstrators appearing in front of the parliament building later last night however he was not given the possibility to address them. He hold a press briefing at the building of the Georgian government afterwards.

"The Minister of Internal Affairs will be heading the investigation process from now on and I am going to be involved at every stage, parents of the murdered teenagers will be informed on a daily basis about the process”, he said, adding that the Justice Minister was ordered to choose a new prosecutor with "maximum legitimacy”.

As for the resignation, PM Kvirikashvili said he would only do so if there was a sign that it would be beneficial for the country.

"Today there is no such situation,” he explained. 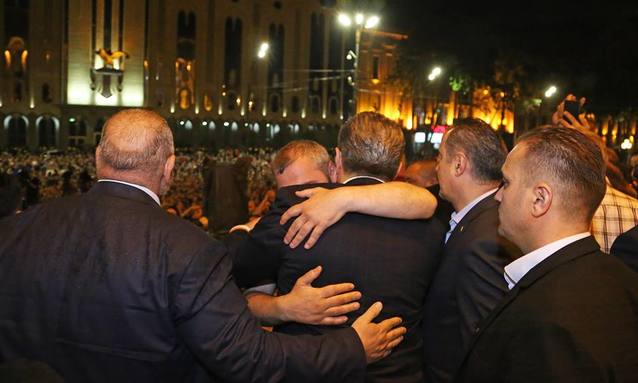 Zaza Saralidze, father of the murdered Davit Saralidze met with PM Kvirikashvili at the demonstration before other participants would demand the PM to leave without giving him a possibility to deliver his message.

Two 16-year-old boys were stabbed to death in a school brawl in Tbilisi on December 1, 2017. Davit Saralidze died in hospital due to multiple wounds in his back, while Levan Dadunashvili died immediately.

The Prosecutor’s Office charged two teenagers with the ‘premeditated murder of an underage person’, and three others for not reporting the crime. As the Interior Minister Giorgi Gakharia said previously the case had around 150 witnesses but only several of them cooperated with law enforcers.