Georgian and foreign opera stars will be involved in the first Georgian premiere of Giuseppe Verdi’s 1857-premiered work Simon Boccanegra at the Tbilisi Opera and Ballet State Theatre next week.

In a premiere bill encompassing four shows, a staging of the opera by Italian TV host and writer Alfonso Signorini will be showcased to audience in the Georgian capital.

The premiere of the three-act staging marks another collaboration between Signorini and the theatre, following a staging of Turandot in March. 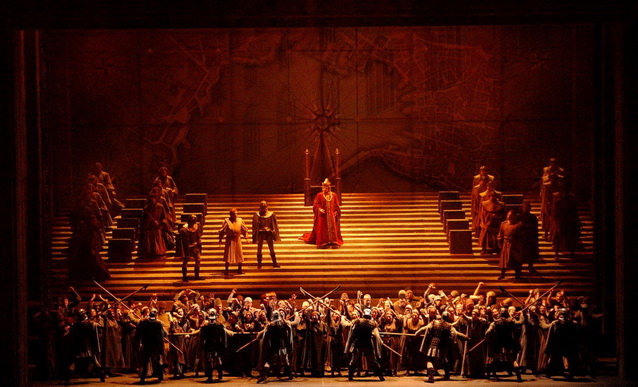 Following its premiere the production will become part of the repertoire for the venue. Photo: Tbilisi Opera and Ballet State Theatre.

In both the roster of opera singers and conductors, Georgian artists and their counterparts from abroad will join to present the plot centred around the 14th century Genoa.

For the launch event of June 10, baritone George Gagnidze, bass Ramaz Chikviladze, soprano Tamar Iveri and tenor Otar Jorjikia will be among the line-up of performers. Conductor Zaza Azmaiparashvili will lead the orchestra for the show.

The redaction set to debut in Tbilisi was staged at Teatro Carlo Felice, the principal venue of Genoa.

Following the maiden show of June 10, Simon Boccanegra will be performed for opera-goers in Tbilisi on June 13, 16 and 17.

A release by the opera venue said the production would be kept as part of its repertoire following the premiere bill.