Georgian author Anna Kordzaia-Samadashvili was selected by The New York Public Library (NYPL) among some of the most famous women writers for a collection of works to mark International Women’s Day on March 8.

The 2015 English edition of Me, Margarita by the award-winning Georgian writer, translator and literary journalist was picked by the library for its list of 365 Books by Women Authors to Celebrate International Women’s Day All Year.

Published on Wednesday to mark the global date, the collection features a wide range of works from fiction stories to academic writing to investigative journalism.

Make every day #InternationalWomensDay with 365 books written by women across the globe: https://t.co/wHJxOtG3NZ#ReadWomenpic.twitter.com/gz0ljRb0WH

This list includes a vast range of women authors, and we hope you find some old favorites and some new discoveries. And we hope that readers can draw strength and inspiration from these 365 books — and the women who wrote them — in the year ahead”, said librarian Gwen Glazer about the compilation.

Kordzaia-Samadashvili features on the list alongside some of the most famous women authors including Margaret Atwood, Hannah Arendt, Virginia Woolf and Sylvia Plath.

Originally printed by Bakur Sulakauri Publishing in Georgia in 2005, the English translation of Me, Margarita was published by Dalkey Archive Press in the United States in 2015.

The collection of short stories was translated by Victoria Field and Natalie Bukia-Peters and is described as "stories about men and women, love and hate, sex and disappointment, cynicism and hope”.

A disillusioned woman, the narrator doesn't mince words about the imperfection of her life, her relationships, her prospects; yet what might in other hands seem discouraging is presented with such humor the reader can't help but feel there may yet be hope... for most of us”, says the NYPL summary of the work. 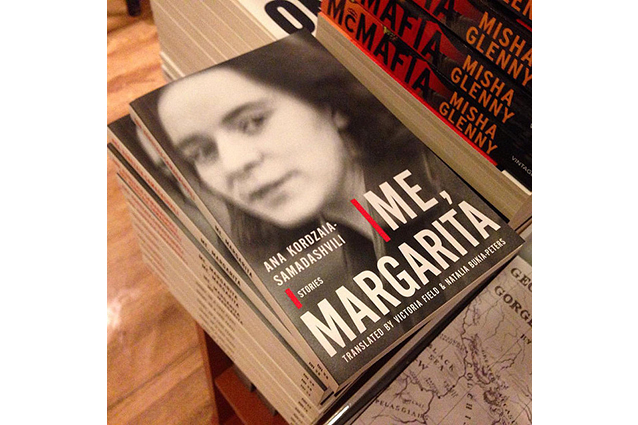 The collection of short stories ‘Me, Margarita’ was published in the US in 2015. Photo: Ralph Haelbig/Flickr.

Beside the English edition, Kordzaia-Samadashvili’s book has also been translated into German and Swedish.

Born in Tbilisi, the writer has authored prosaic works printed by Georgian publishing houses over the last 15 years.

In Georgia, Kordzaia-Samadashvili has been awarded with the 2003 Saba Literary Prize for the novel Berikaoba and the 2013 Ilia State University Prize for Best Georgian Novel for Who Killed Chaika?.

She also received the 1999 Goethe Institute Georgia prize for her translation of the novel Women as Lovers by Austrian Nobel Prize laureate Elfride Jelinek.

Founded in 1895, the NYPL is the largest public library network in the US with over 51 million items including books, e-books and DVDs.

The institution serves "more than 17 million patrons” every year and millions of online readers.