The Georgian Government is continuing its dialogue with local business leaders, introducing them to current and future reforms, and offering a supportive hand to the wider business community as it carries out its activities.

The main directions of Georgia’s economic policy and Governmental initiatives to stimulate business were the topics of discussion at the meeting held yesterday between Georgia’s Economy Minister Giorgi Gakharia and the Business Association of Georgia.

Established in 2009, the association has a membership of up to 70 leading companies in Georgia. The main function of the organisation is to represent to the government and protect legitimate and objective business interests of the member companies.

We are ready to communicate with them [the business community of Georgia] 24 hours a day. It is crucial for the Ministry of Economy to develop a strong business environment in Georgia and solve the structural problems such as trade balance and attracting foreign direct investments (FDIs) in the country,” said Gakharia.

The Georgian business community talked about the current challenges they face and offered ways how to overcome them. 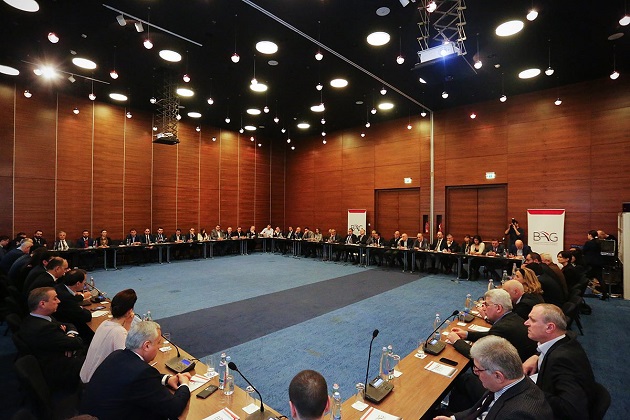 The Business Association of Georgia has a membership of up to 70 leading companies in Georgia. Photo by Georgia's Ministry of Economy.

They were mostly interested in the government’s plans regarding future pension reform and capital market development activities.

In response the minister said an open discussion about Georgia’s pension reform would begin in March.

In the nearest future we are going to complete the draft law. The World Bank and the Asian Development Bank together with other international financial organisations are involved in this process. From March we are going to start open discussions first of all with business associations and later we will then send the draft law to the parliament”, said Gakharia.

The minister believes the implementation of the pension reform will start in 2018.

Meanwhile, president of the Business Association of Georgia Giorgi Chirakadze said the Association is ready to cooperate with the Ministry of Economy in all useful directions.

Business is ready to cooperate actively with the Ministry of Economy to have higher economic growth and to create more work places. It is very important that the minister understand the problems business faces. It is also important to have such meetings in the future as well,” said Chirakadze.