The NBA released the results of the first round of voting yesterday where Pachulia - a starting centre for the Golden State Warriors (Oakland) - took second place among the Western Conference frontcourt players (439,675 votes), trailing only behind teammate Kevin Durant (541,209 votes).

It was this time last year when Georgian fans launched their first active campaign in support of their favourite basketball player.

Although Pachulia, who had an outstanding season playing for the Dallas Mavericks in 2016 lacked 14,000 votes at the last competition. While he stayed behind the Western Conference frontcourt players and thus did not make the three - player cutoff, he did send "special thanks to everyone for such recognition and support”. 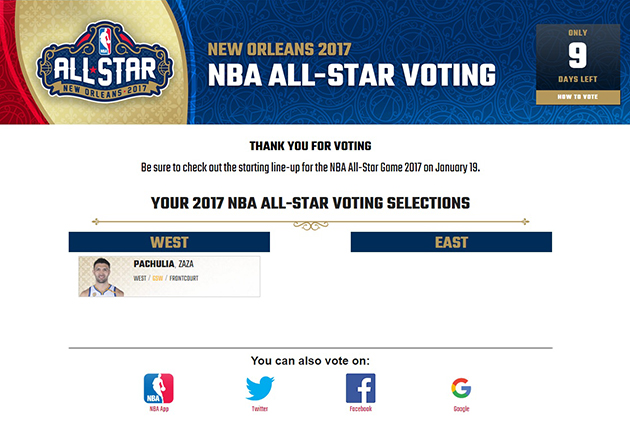 Changes to the "rule of the game”

Pachulia has been averaging 5.2 points and 5.8 rebounds in 17.7 minutes per game as Golden State’s starting centre.

But he has a long battle ahead of him, given that this year’s voting rules have been slightly changed to a ‘weighted formula’. Now, the final vote will be determined 50% by fan votes, 25% by player votes and 25% by sport media votes.

As senior writer for FOX Sports Andrew Lynch explained on Twitter, after all votes are tallied, players will be ranked in each conference by position (guard and frontcourt) within each of the three voting groups – fan votes, player votes and media votes.

Lynch further explained that each player’s score will be calculated by averaging his weighted rank so that the five players (two guards and three frontcourt players) with the best score in each conference will be named NBA All - Star Game starters.

How to vote for your favourite?

NBA All - Star Game 2017 promises to bring together "some of the most talented and passionate players in the league’s history for a global celebration of the game”.

If you want to cast your vote, get out your device and submit one ballot each day through NBA.com, the NBA App (available on Android and iOS), Twitter, Facebook and Google Search, as well as via Sina Weibo and Tencent Microblogs in China. NBA voting for fans, players and media will conclude on January 16 at 11:59 p.m. ET.