Renowned American film director and producer David Lynch is in Georgia to hold talks for the filmmaker's cinema- and social initiatives launching in the country and share his insight with local audience.

The director of celebrated films Twin Peaks and Mulholland Drive arrived in Tbilisi on Saturday and met high-ranking officials in the capital.

Hosted at the Parliament of Georgia on Sunday, Lynch was received by Chairperson of the Education, Science and Culture Committee Mariam Jashi and Minister of Culture of Georgia Mikheil Giorgadze. 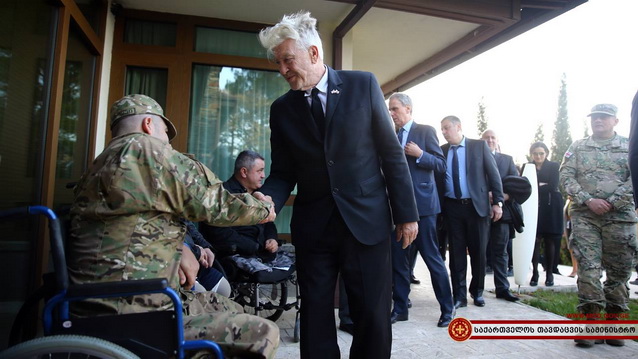 The discussion involved review of prospects for launching a new school of cinematography in Georgia using the resources available at the long-standing Shota Rustaveli Theatre and Film Georgia State University and a range of private universities.

It is a wish of [David Lynch] to see the founding of an international university of cinema in Georgia. Talks on the idea are at a conceptual stage at this moment, and I have great wish to see it turned into reality soon", said Jashi in her comments on the meeting.

The Georgian official also spoke about guiding the acclaimed visitor through various facets of local culture, from a show of the Erisioni folk singing and dance ensemble to tasting of cuisine and Georgian wine.

Along with talks on prospective projects in Georgia, the American filmmaker was also hosted at the Maro Makashvili Tserovani Rehabilitation Centre for injured service members.

He was flanked during the visit by representatives of the Caucasus branch of the David Lynch Foundation. The local office was launched earlier this year and is involved in projects including road safety and post-trauma rehabilitation.

Lynch spoke to injured service members undergoing treatment at the Centre about the foundation's work in employing the technique of Transcendental Meditation (TM) in psychological therapy.

The technique is also going to be the central subject of a Q&A session at the Khidi Club in Tbilisi later today, where Lynch will share his "experience and insight about film, creativity and the development of one's full potential" through TM.