Modern border facility opens thanks to US support

Georgia’s Minister of Internal Affairs Giorgi Mgebrishvili and the US Ambassador to Georgia Ian Kelly have opened a renewed, modern building of the #7 Border Sector "Sulda” of the second border police division located in eastern Akhaltsikhe region.

The new, modern facility, constructed with the financial support of the US Defence Threat Reduction Agency (DTRA), covers 15 km segment of the Georgian-Turkish state border.

Developing the Border Police of Georgia, enhancing its law-enforcement capacity, equipping it with modern technologies and reconstructing its infrastructure are top priorities for the Ministry of Internal Affairs, as secure borders are essential for the country’s security,” Minister Mgebrishvili stated. 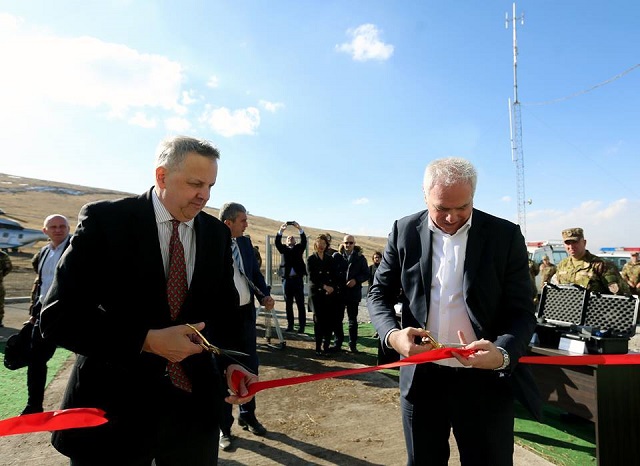 The minister expressed gratitude towards the US government, its embassy to Georgia and the DTRA.

Highly important projects are implemented in the Border Police of Georgia through their assistance,” Mgebrishvili said.

Guests from the US embassy and Georgian ministries viewed border guards’ equipment and vehicles, which had been supplied by the DTRA.

The Interior Ministry press office says that with the support of the DTRA, "extensive work” has been done to enhance border security in Georgia.

The ministry wrote that the partnership was focused on the renovation and reconstruction of border sectors, the administrative building of K9 Division and maritime infrastructure, as well as equipping Georgian borders with Border Operation Monitoring System and improving its ship repairing capabilities.